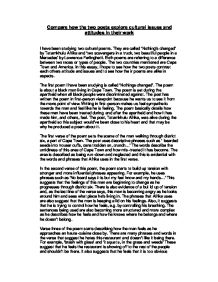 Compare how the two poets explore cultural issues in their work

Compare how the two poets explore cultural issues and attitudes in their work I have been studying two cultural poems. They are called 'Nothing's changed' by Tatamkhulu Afrika and 'two scavengers in a truck, two beautiful people in a Mercedes' by Lawrence Ferlinghetti. Both poems are referring to a difference between two races or types of people. The two countries mentioned are Cape Town and America. In this essay, I hope to see how the two poets contrast each others attitude and issues and to see how their poems are alike in aspects. The first poem I have been studying is called 'Nothings changed'. The poem is about a black man living in Cape Town. The poem is set during the apartheid when all black people were discriminated against. The poet has written the poem in first-person viewpoint because he wants us to see it from the mans point of view. Writing in first-person makes us feel sympathetic towards the man and feel like he is feeling. The poem basically details how these men have been treated during and after the apartheid and how it has made him, and others, feel. The poet, Tatamkhulu Afrika, was alive during the apartheid so this subject would've been close to his heart and that may be why he produced a poem about it. ...read more.

The fifth verse of the poem is describing what the caf� is like that only black people are allowed into. The poet describes this caf� so that readers can get a clear insight into the differences between the location where whites eat and the place where black people live. There are lots of useful phrases such as 'working mans caf�' and 'spit a little on the floor' and 'it's in the bone'. The choice of these phrases suggests that the caf� is run by people who work hard for their money, not like the people in the restaurant who work less and earn more. The further phrases used suggests that the caf� is as cheap as possible and has no style. There are also suggestions that there isn't any cutlery because people have to wipe their hands on their jeans instead of using napkins like the restaurant does. The last phrase 'it's in the bone' could have more than one meaning. It could suggest that the black people know that's what they're expected to do or it could also mean that the people are looking for a change in the way district six is run and organized. The final verse of the poem is describing the mans sudden expression of his anger towards this restaurant. ...read more.

By laying out the poem in this way, the poet is possible hoping for the reader to get an insight into the differences between the two sets of people. In N.C., the poet has written the poem in first-person whereas in Two scavengers, he has decided to write it in third person. This may be because he is hoping for the reader to gain a better insight into the feelings of the two scavengers instead of getting the views of just one person. Towards the end of the poem, the poet describes how the two scavengers look like they're looking at an 'odourless TV ad'. This symbolises that although being like the two beautiful people seems possible, it is actually out of reach. Also, the notion of the TV ad may mean that although when you look at a TV ad and it seems possible, you cannot touch it therefore it is out of reach. In conclusion, in have summarised the two poems in general, looking in detail at how they are similar in different ways and how they are different in others. I have successfully looked at and analysed the styles, content and attitudes on both of the poems, comparing them where necessary. So, I have successful addressed the task set to me and explored cultural differences and attitudes in the works of these two poets. ?? ?? ?? ?? ...read more.