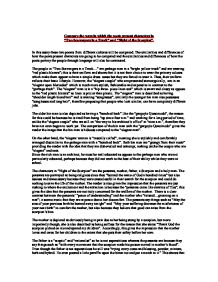 Compare the ways in which the poets present characters in

Compare the ways in which the poets present characters in "Two Scavengers in a Truck" and "Night of the Scorpion". In this essay these two poems from different cultures will be compared. The similarities and differences of how the poets present characters are going to be compared and the similarities and differences of how the poets portray the people through language will also be contrasted. The people in "Two Scavengers in a Truck..." are garbage men in a "bright yellow truck" and are wearing "red plastic blazers"; this is their uniform and shows that it is not their choice to wear the primary colours which make them appear to have a simple dress- sense but they are forced to wear it. Thus, their uniform reflects their basic lifestyle. However, the "elegant couple" who are presented stereotypically, are in an "elegant open Mercedes" which is much more stylish, fashionable and expensive in contrast to the "garbage truck". The "elegant" man is in a "hip three- piece linen suit" which is smart and classy as oppose to the "red plastic blazers" as linen is pricier than plastic. The "elegant" man is described as having "shoulder length blond hair" and is wearing "sunglasses", similarly the younger bin man also possesses "sunglasses and long hair", therefore proposing that people who look similar, can have completely different jobs. The older bin man is also depicted as having a "hunched back" like the "gargoyle Quasimodo", the reason for this could be because he is tired from being "up since four a.m." ...read more.

Another difference is that the "elegant couple" is rich compared to the characters in Night of the Scorpion , the rich couple is also educated but the characters in Night of the Scorpion most likely are not. The poet of Two Scavengers in a Truck thinks the characters are unequal but they should be equal. He enforces the idea of how this "system" works and that it should be questioned. He shows that people who are from such segregated worlds and live such different, separate lives usually do not come together, and if they do, it is only because of such circumstances:- like a red light on the street which is "for an instant holding all four together as if anything at all were possible between them". For that reason, the stoplight is the only thing which can stop both lives and can combine people from different worlds, hence all hope is held within the red light. However, the red light could also represent that they can only be together "for an instant" and that they will soon have to return to their unconnected and separate lives. The poet gives justification for the way the garbage men look and behave by writing that they were "up since four a.m." and maybe in his view this is an indication that the "elegant couple" do not work as hard. The poet answers all the questions he has raised in this poem; due to the "system"- this alleged "democracy", there are levels of status and people are categorised and labelled. ...read more.

In my opinion, Two Scavengers in a Truck is more appealing in view of the fact that it keeps the reader thinking, furthermore it forces the reader to question the world we live in and whether there is a thing such as "democracy", and how we are supposed to be living in a "modern" world and "modern" culture in which everyone is equal, but is that really the reality? However, Night of the Scorpion has a major effect too, by presenting a tragic situation which represents the seriousness of the lack of health and medical care in poor countries. It is also an uplifting poem which shows a family never giving up hope. Similarly, both poems contain conflict: - Two Scavengers is between two worlds and whether democracy exists at all, and Night of the Scorpion is a struggle between maintaining hope and faith and giving in to your fears and doubts. Despite the impact of Night of the Scorpion if the reader was not from a third-world country, they would probably find Two Scavengers in a Truck more appealing as it discusses issues which are relevant and significant to them in their country and culture, moreover it debates about problems which would actually make a difference to them and affect them if they are supposedly living in a "democracy". On the contrary, if the reader was from a poor country and had experienced or witnessed lack of medical care, they would most likely prefer Night of the Scorpion as it exposes issues which they would find relevant. ...read more.