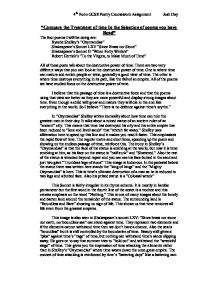 "Compare the Treatment of time In the Selection of poems you have Read" The four poems I will be doing are: Bysshe Shelley's "Ozymandias" Shakespeare's Sonnet LXV "Since Brass nor Stone" Shakespeare's Sonnet II "When Forty Winters" Robert Herrick's "To the Virgins, to Make Much of Time" All of these poets talk about the destructive power of time. There are two very different ways that you can look at the destructive power of time. One is where time can mature and enrich people or wine, generally a good view of time. The other is where time destroys everything in its path, like the fall of an empire. All of the poems we have studied focus on the destructive power of time. I believe that the passage of time is a destructive force and that the poems using that view are better as they are more powerful and display strong images about time. Even though a child will grow and mature they will die in the end like everything in the world. So I believe "There is no defence against time's scythe." In "Ozymandias" Shelley writes ironically about how time can ruin the greatest men in their day. It talks about a ruined statue of an ancient ruler of an "ancient" city. ...read more.

He goes on to say that summer tries to "hold out" and withstand the "wreckful siege" of time. This gives you the impression of time attacking the elements rather than in Shelley's "Ozymandias" where time wears down the once great empire. The conceit of time attacking is reinforced by time's "battering days" like a battering ram used in a siege against a fortress. Here the fortress is summer being whittled down by time. He then goes on to tell us that not even "rocks impregnable" of "Strong gates of steel" can withstand the onslaught of time. This is similar to "Ozymandias" where the whole antique city has been levelled by time's onslaught. Also Shakespeare's sonnet LXV shows us "time's decay" and then he gives us some examples of how no one can hold back "time's swift foot." Not even a "Strong hand" can stop time. There is a reference to this in Shelley's "Ozymandias" where time cannot be stopped and an entire city could not defend against time. Shelley's "Ozymandias" gives no solution to this riddle. In this sonnet by Shakespeare you get an answer how to defeat time. The solution offered by Shakespeare is that beauty "may still shine bright" in "black ink." ...read more.

In Shelley's "Ozymandias" also uses the use of long vowel sounds. There is also the use of enjambment in the eleventh and twelfth lines. This gives the poem a burst of speed and shows time rushing by like the alliteration in the poem with "race is run." Herrick uses the theme of day and night to show the aging process. He talks about how the "higher the sun" rises the sooner its "race be run" This also supports the evidence that your youth is good as it is the morning of your life which is light and fresh whereas death is dark and cold. This is the solution Herrick gives us, a solution different to Shakespeare's in LXV. He does give an answer unlike Shelley in "Ozymandias." Herrick tells the "virgins" to "make much of time" and "breed" as well as "marry." All of these poems give a good description of times destructive power but I believe that Shelley's "Ozymandias" has the most meaning to me and has some very strong images of the desolate desert and the endless sands stretching away. I also like it that there is no solution offered to times destructive ways as this is what I also feel. There is no way to escape times "battering days" and all that will be left are "lone and level sands stretching far away" for all of us. 4th Form GCSE Poetry Coursework Assignment Josh Day ...read more.