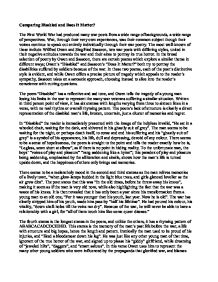 Comparing Disabled and Does It Matter?

Comparing Disabled and Does It Matter? The First World War had produced many war poets from a wide range of backgrounds, a wide range of perspectives. War, through their very own experiences, was their common subject though their voices continue to speak out entirely individually through their war poetry. The most well-known of these include Wilfred Owen and Siegfried Sassoon, two war poets with differing styles, united in their negative attitudes towards the war and their aims to portray its true horror. In the broad selection of poetry by Owen and Sassoon, there are certain poems which explore a similar theme in different ways; Owen's "Disabled" and Sassoon's "Does It Matter?" both try to portray the disabilities suffered by soldiers because of the war. In these two poems, each of the poet's distinctive style is evident, and while Owen offers a precise picture of tragedy which appeals to the reader's sympathy, Sassoon takes on a sarcastic approach, choosing instead to slice into the reader's conscience with cutting questions. The poem "Disabled" has a reflective and sad tone, and Owen tells the tragedy of a young man losing his limbs in the war to represent the many war veterans suffering a similar situation. ...read more.

In this verse Owen uses him to represent the many other young soldiers who were influenced by the propaganda that glorified war, and blames the officials for drafting the soldiers despite knowing they are underage, "Smiling they wrote his lie: aged nineteen years". In contrast, the fifth stanza is the shortest stanza, symbolizing the little return he received despite sacrificing his legs for the war. The celebration for his return could not even compare to when he got a goal in football, and "only a solemn man who brought him fruits thanked him". The emphasis on "thanked" might even suggest that the man was insincere. The last stanza returns to his current situation, where he is completely dependant on the others, only taking "whatever pity they may dole". His life is now completely meaningless, and women wouldn't even spare him a glance. He only asks for someone to end his misery, and the poem ends with a hopelessly echoing cry, "Why don't they come and put him to bed? Why don't they come?" On the other hand, Sassoon's "Does it Matter?" appears to be the complete opposite. In contrast to "Disabled", "Does it Matter?" ...read more.

Here Sassoon is attacking those who glorify war, sarcastically agreeing with them that fighting for your country justifies everything, even your madness. On the other hand, the last line could mean that people would not care even though the soldiers have sacrificed themselves for their countries. This ending is similar to that of "Disabled" where the man is left out alone in the dark, waiting for someone to come and put him to bed. Hence both poems conclude that in the end, the sacrifices and resulting disabilities of the soldiers were all for nothing. It is with such differing styles that Owen and Sassoon portray their ideas of soldiers' disabilities in their poems "Disabled" and "Does It Matter?" respectively. While "Disabled" is long, with no set structure to represent the scattered life of the disabled man, "Does It Matter?" is short, with distinctive rhyme and rhythm similar to a nursery rhyme to attain the voice of someone patronizing a child. Be it through Owen's sorrow and reflections, or Sassoon's sarcasm and questioning attacks, both poets' sympathy for victimized soldiers and anger for the ones glorifying the war are evident; the two poems act as reinforcements for each other, ensuring that their message is delivered, and understood, by all. ...read more.