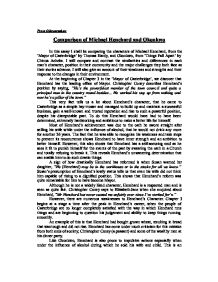 Comparison of Michael Henchard and Okonkwo.

Freya Ollerearnshaw Comparison of Michael Henchard and Okonkwo In this essay I shall be comparing the characters of Michael Henchard, from the 'Mayor of Casterbridge' by Thomas Hardy, and Okonkwo, from 'Things Fall Apart' by Chinua Achebe. I will compare and contrast the similarities and differences in each man's character, position in their community and the major challenges they both face as their stories advance. I will also give an account of their weakness and strengths and their response to the changes in their environment. At the beginning of Chapter 3 in the 'Mayor of Casterbridge', we discover that Henchard has the leading office of Mayor. Christopher Coney describes Henchard's position by saying, "He's the powerfulest member of the town council and quite a principal man in the country round besides... He worked his way up from nothing and now he's a pillar of the town." This very fact tells us a lot about Henchard's character, that he came to Casterbridge as a simple hay-trusser and managed to build up and maintain a successful business, gain a well-known and trusted reputation and rise to such a powerful position, despite his disreputable past. To do this Henchard would have had to have been determined, extremely hardworking and ambitious to make a better life for himself. Most of Henchard's achievement was due to the oath he swore straight after selling his wife while under the influence of alcohol, that he would not drink any more for another 26 years. The fact that he was able to recognise his weakness and take steps to prevent its reoccurrence shows Henchard to have inner strength and an ambition to better himself. However, this also shows that Henchard has a self-accusing soul as he sees it fit to punish himself for the events of the past by swearing the oath in a Church and totally refusing to break it. ...read more.

Because Farfrae is young, he believes in the modernisation of business; Henchard, however, is keen for things to remain as they are and feels threatened by Farfrae's new ideas and charisma which have attracted the attention of people in Casterbridge. When there is a day of celebration in the town, both men organise their own entertainment. Because of the bad weather, no one turns up to Henchard's for which he chose an exposed venue and instead most people attend the dance Farfrae has organised. This angers Henchard to such an extent that in a fit of rage and jealousy he discharges Farfrae publicly from his services. This leads to Farfrae setting up his own independent business, causing Henchard's anger to greatly increase. When he is informed of Farfrae's actions 'his voice might have been heard as far as the town pump expressing his feelings to his fellow councilmen'. Henchard feels deeply betrayed, even though it was his jealous rage that gave Farfrae little option but to set up on his own. From this moment in the book, Henchard despises Farfrae and declares to Elizabeth-Jane 'he's an enemy to our house' However, Farfrae's rivalry begins to extend further than business when Lucetta, a young woman from Henchard's past, falls in love with him. Lucetta had moved to Casterbridge after hearing of the death of Henchard's late wife, in the hope of being reunited with him. Henchard returns these wishes but does not hasten to see Lucetta and when he finally expresses his desires, she turns down his proposal. Henchard is shocked by her refusal and is convinced that there was a reason for it. 'there was rivalry by someone he was firmly persuaded'. On discovering that the culprit was Farfrae, Henchard predictably looses his temper and acts impulsively by visiting Lucetta late at night and forcing her to promise herself to him. He does this by saying to her, 'Unless you give me your promise this very night to be my wife...I'll reveal our intimacy-in common fairness to other men'. ...read more.

Okonkwo killed himself partly because of his anger at the tribe, who let him down when he needed them most. This demonstrates his aggression and passion for his beliefs and desperation because he had to resort to death. It is also quite triumphant because by doing this, Okonkwo has escaped being executed by the District Commissioner, who now cannot punish him. In this sense, Okonkwo is goading him. The death of Henchard is also because of desperation in that he saw death as the only option left to him. However, Henchard's death is much more selfish as he does it because of self-pity. He dies because he loses the will to live and so slowly deteriorates. This is because he has lost everything of value to him- his wealth, status, daughter, reputation as well as his daughter and Lucetta. Henchard's will reflects the sorrowful state he was in at the time of his death: '& that no mourners walk behind me at my funeral. & that no flours be planted on my grave. & that no man remember me.' However, it is hard not to feel sorry for Henchard and Okonkwo because they both try to do what they consider is right but things never go as they expect. This has a lot to do with their impulsive and aggressive characters but also because of the forces of change in Umuofia and Casterbridge and their failure to adapt with the times. In the end their ruin is due to their strong belief in the superiority of the old ways and how it used to be. Even if they are right, there is little they can do to stop the change that they oppose so strongly. However, the key difference between the two men is their reaction to this change. Okonkwo keeps fighting it and kills himself in angry defiance of the new ways whereas Henchard gives up all hope and lets himself slowly slip away. Okonkwo's death will be remembered, Henchard's will not. ...read more.