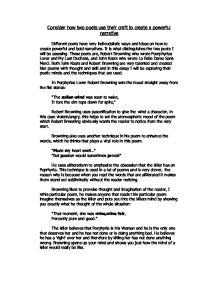 Consider how two poets use their craft to create a powerful narrative.

Consider how two poets use their craft to create a powerful narrative Different poets have very indivudalistic ways and ideas on how to create powerful and bold narratives. It is what distinguishes the two poets I will be assesing. These poets are, Robert Browning who wrote Poerphyrias Lover and My Last Duchess, and John Keats who wrote La Belle Dame Sans Merci. Both John Keats and Robert Browning are very talented and created hier poems with thought and skill and in this essay I will be exploring their poetic minds and the techniques that are used. In Porphyrias Lover Robert Browning sets the mood straight away from the fist stanza: "The sullen wind was soon to wake, It tore the elm tops down for spite," Robert Browning uses pasonification to give the wind a character, in this case violent/angry, this helps to set the atomospheric mood of the poem which Robert Brwoning obviously wants the reader to notice from the very start. Browning also uses another technique in his poem to enhance the words, which he thinks that plays a vital role in this poem. ...read more.

In, My Last Duchess, Robert Browning uses even more techniques in order to create a realistic and bold dramatic monologue. In order to create a dramatic monologue, one of the most important things is for the readers to be able to put themselves in the character place, so they can imagine just what it would be like to be, in this case, the Duke: "This sort of trifling, even if I had your skill in speech - (which I have not) - to make your will Quite clear..." The caesurus suggests to the reader that the Duke is pausing to think, or hiding, he pauses out of nervousness/worry. Also notice the enjambed lines, these indicate the control and domination the Duke has in this conversation, and it gives you the feeling that the he is rushing through certain parts of the conversation to avoid question... Another example of enjambement in this poem is line 53/54: "Though the fair daughters self,as I avowed at starting, is my object. ...read more.

Oh sir, she smiled, no doubt," John Keats is a completeley different type of poet to Robert Browning, he does not use as many techniques but focuses more on the language used for example the verbs and adjcetives are all carefully chosen. He uses sesuous language and imagery in this poem to open up the readers mind: "Manna dew" "Roots of relish sweet" This type of language makes the readers mind open up and become more imaginative, making it easier for the reader to imagine and play out the poem in his/her mind. John Keats enchances the knight's tale by contrasting the middle section of the poem with the first and last stanzas, which have bleak description and not many interesting adjectives. The poem uses the Q and A (question and answer) structure and repetition to bring it to a full circle. John Keats has chosen a very archaic choice of language in La Belle Dame Sans Merci: "And there she lulled me asleep, And there I dream'd - ah! woe betide! He uses this choice of language to amphasize the knights tale/ballad and it helps the reader to put himself in the knights character which is an essential ingrediant of a dramatic monologue. ...read more.