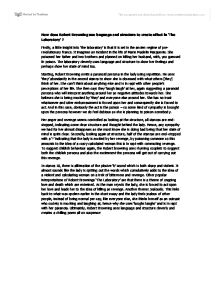 How does Robert Browning use language and structure to create effect in The Laboratory ?

How does Robert Browning use language and structure to create effect in 'The Laboratory' ? Firstly, a little insight into 'the laboratory' is that it is set in the ancien regime of pre-revolutionary france. It imagines an incident in the life of Marie Madelin Marguenie. She poisoned her father and two brothers and planned on killing her husband, with, you guessed it: poison. The laboratory cleverly uses language and structure to show her feelings and perhaps show her state of mind too. Starting, Robert Browning emits a paranoid persona in the lady using repetition. He uses 'they' abundantly in the second stanza to show she is obsessed with what others [they] think of her. ...read more.

And in this case, obviously the act is the poison - so some kind of sympathy is brought upon the persona however we do feel dubious as she is planning to poison somebody. Her anger and revenge seems controlled as looking at the structure, all stanzas are end-stopped, indicating some clear structure and thought behind the lady. Hence, any sympathy we had for her almost disappears as she must know she is doing bad being that her state of mind is quite clear. Secondly, looking again at structure, half of the stanzas are end-stopped with a '!' indicating that the lady is excited by her revenge, by poisoning someone so this amounts to the idea of a crazy calculated woman this is in rapt with commuting revenge. ...read more.

Other popular interpretations of Robert Brownings 'The Laboratory' are that there is a theme of ongoing love and death which are entwined. As the man rejects the lady, she is forced to act upon her love and leads her to the idea of killing as revenge. Another theme: jealously. This links back to what was spoken earlier in the short essay and the lady feels jealous of other people, instead of being normal per say, like everyone else, she thinks herself as an outcast who society is mocking and laughing at, hence why she uses 'laughs laughs' and is in rapt with her paranoia. Ultimately, Robert Browning uses language and structure cleverly and creates a chilling poem all on suspense! ...read more.