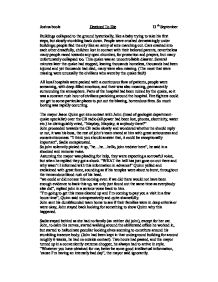 Joshua bools Destined To Die 13th September Buildings collapsed to the ground hysterically, like a baby trying to take his first steps, but slowly stumbling back down. People were crushed devastatingly under buildings; people fled the city like an army of ants marching out. Cars crashed into each other dreadfully, children lost in contact with their beloved parents, nevertheless many people raced towards any open churches, for protection and prayers, but many unfortunately collapsed too. This quake was an uncontrollable disaster. Several minutes later the quake had stopped, leaving thousands homeless, thousands had been injured and yet thousands had died, many were also missing. (The most that were missing were unusually the civilians who were by the quake fault) All local hospitals were packed with a continuous flow of patients, people were screaming, with deep-filled emotions, and their was also moaning, permanently surrounding the atmosphere. Parts of the hospital had been ruined by the quake, so it was a constant rush hour of civilians panicking around the hospital. Fire fighters could not get to some particular places to put out the blazing, horrendous fires. ...read more.

(John had been kept in that underground building for around roughly 6 weeks, he had no outside contact). Two hours had passed, and the mayor turned up in a conveniently extreme chopper, he always had to arrive in style. "Whatever you have obtained for me, better be some good intellectual information, 'cause I'm having an intensely bad day", the mayor said ignorantly. Luckily Sadie and john had supposedly had enough supportive, complex evidence. After a forty-five minute fully in- depth, narrative, comprehensive and also quite erratic lecture/session, Quinn was with an overload of information. Why could they not see the unexplained fault? Why was it so well hidden? Why was there no graphical layer? What John could not help the fact that these irrative elves, and unusual creatures were hanging around, crawling up and down the walls, slithering across the floor, they were becoming exceedingly close. One bizarre creature had the most gigantic puppy like eyes, with slime crawling down its deformed pointed, hollow face, jagged teethed jaw. It's long lanky bewitched claws spookily sketched towards john. John's stiff upper lip of confidence had suddenly gone and had began to shiver, there was now no state of secure confidence ...read more.

"Who says we're coming back?" john awkwardly commented. "Oh, you do often gather the weirdest accumulations, and if you were trying to be facetious, it most definitely did not work!" Sadie answered back in the most abrupt way. John thought he was being truthful; after all, he'd been having these dreams, when sleeping, as well as day dreaming, what if had been going insane? Going down into the pitch black and humid heat would not help. As the tremendous machine started to excavate into the dark ground he knew he had just seen this before, what with all the questionable images in his mind, john started to feel horrified with these crude illustrations portrayed in his uncanny mind. The hole was getting deeper. Several hours had passed, and john did all he could to extrude the exuberant images, but the deeper they proclaimed, the more it was of a facsimile to his absurd brain. He had no equanimity. John did not say anything to Sadie as he did not want to petrify her, although she asked why he kept on coming out in constant sweats, the excuse was he was excited to see what was down here, but he knew he was terrified, but any how there was no going back now, definitely not for a long time. ...read more.