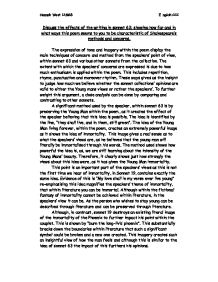 Discuss the effects of the writing in sonnet 63; showing how far and in what ways this poem seems to you to be characteristic of Shakespeare's methods and concerns.

Discuss the effects of the writing in sonnet 63; showing how far and in what ways this poem seems to you to be characteristic of Shakespeare's methods and concerns. The expression of tone and imagery within the poem display the main techniques of concern and method from the speakers' point of view, within sonnet 63 and various other sonnets from the collection. The extent with which the speakers' concerns are expressed is due to how much enthusiasm is applied within the poem. This includes repetition, rhyme, punctuation and moreover rhythm. These ways gives us the insight to judge how much we believe whether the sonnet collections' opinions are valid to either the Young mans views or rather the speakers'. To further weight this argument, a close analysis can be done by comparing and contrasting to other sonnets. A significant method used by the speaker, within sonnet 63 is by preserving the Young Man within the poem, as it creates the effect of the speaker believing that this idea is possible. The idea is identified by the line, "they shall live, and in them, still green". The idea of the Young Man living forever, within the poem, creates an extremely powerful image as it shows the idea of immortality. This image gives a real sense as to what the speakers' views are, as he believes that the young man will literally be immortalised through his words. ...read more.

Personification of time, within this sonnet creates a powerful image "Time's injurious hand". The idea that time being a hand makes the idea of time more vigorous and that the threat the speaker is making, about time, so much more vivid. The effect of this idea is that it makes us, the reader, aware of the emphasis with which the speaker wishes to put forward his ideas. The imagery used is to clarify exactly what the speakers' message; that time is a very powerful thing and that it will overpower everyone. This idea is real and that is why the impact of this personification is much more effective. A critic felt the image of "time's injurious hand" is not the only reference to time portrayed throughout the sonnet and that every single line had a reference to time. If we look more closely we can indicate this "Against...Time's...hours...with lines and wrinkles...age's steepy night...now". As we can see the idea that the critic proved correct shows the stark message about time that the speaker was trying to achieve. Therefore emphasising my previous point about "Time's injurious hand". How it can be accurately said, that the speaker believes, that the idea of time and death are a main factor in his opinions. I feel that this opinion strategically shows the speakers' views and methods; it illuminates his concerns significantly, but also sets a particular style as to how the speaker wishes to express these concerns. ...read more.

As previously the word "with" was used therefore showing that it was happening now and that it is not going to be escaped. However, the word "Against" is used in the last quatrain because it shows that time is being defeated. This shows the positive change in tone from one part of the sonnet to another. In comparison sonnet 30 also makes a positive resolution about time within the couplet at the end. This is identified by "All losses are restor'd, and sorrows end". This shows, that time is not so almighty that you cannot have a resolution to defeat it. It allows for the idea that something positive could possibly be achieved from something so terribly negative. Although the sonnets are different, as in sonnet 30 the speaker is only feeling positive as he has just repaid a debt to a friend. This debt will have to be repaid again, however, as this positive feeling within the sonnet will not last forever. He feels the debt of sorrow which he is repaying can only be cancelled out by his friend. However, the positive attitude within sonnet 63 is because he has managed to immortalise the Young Man within the sonnet. Therefore the positive feeling he has achieved will be more long lasting as he has given the Young Man the ultimate compliment as he is now immortalised. To draw all of these ideas together it would be unfair to conclude that there is only one substantial method or concern that the speaker or Shakespeare expresses. ...read more.