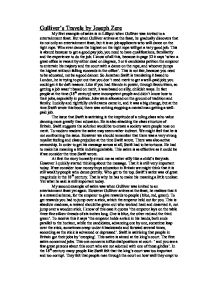 Gulliver's Travels by Joseph Zere My first example of satire is in Lilliput when Gulliver was invited to a entertainment feast. But when Gulliver arrives at the feast, he gradually discovers that its not only an entertainment feast, but it is an job applicants who will dance on the tight rope. Who ever dance the highest on the tight rope will get a very good job. This is absurd because to get a good pay job, you need to have qualifications, familiarity and the experience to do the job. I know of all this, because in page 32 it says 'when a great office is vacant by either dead or disgrace, 5 or 6 candidates petition the emperor to entertain his majesty and the court with a dance on the rope, and whoever jumps the highest without falling succeeds in the office'. This is not fair, because you need to be educated, not be a good dancer. So Jonathan Swift is translating it based to London, he is trying to put out that you don't need merit to get a well-paid job; you could get it for daft reasons. Like if you had friends in power, through favouritism, so getting a job wasn't based on merit, it was based on silly, childish ways. ...read more.

The best satirists such as Swift have the imagination to came up with crazy situations and they have the control if language and tone to put this into kind if language people would expect to hear speaking about serious things. The solution that Swift seems to suggest is that the King should not be in charge of appointing people to important positions. He also suggests that in England the Prime Minister is to close to the king and is also corrupt. It is noticeable the emperor and the 'first minister' share the holding of the stick. Swift suggests that Prime Minister should be separate from the king and that important jobs should be given out elected people in parliament. If anything, this satire is even tougher on the King and the government than the first one. It takes less care to hide what it is really talking about. The King, Prime Minister and the sensor at the time Swift wrote, must have known what he was talking about. One of the reasons I enjoyed this so much was that I got a sense of danger from it. Swift is walking a very thin line between openly criticising the King and keeping it well hidden enough. ...read more.

Throughout much of Part I, Swift satirizes European practices by implicitly comparing them to outrageous Lilliputian customs. In Chapter VI, however, Gulliver describes a number of unusual Lilliputian customs that he presents as reasonable and sensible. This chapter, which implicitly describes improvements that could be made in European society, is less satirical and ironic than the previous chapters. We may infer that Swift approves of many of these institutions. Clearly, there is a good case to be made for treating fraud as a more serious crime than theft and for making false testimony a capital crime. The very fabric of society depends upon trust, so dishonesty may be even more damaging than theft and violence. In general, the customs of Lilliput that Swift presents as good are those that contribute to the good of the community or the nation as opposed to those that promote individual rights or freedoms. Ingratitude is punishable by death, for instance, because anybody who would treat a benefactor badly must be an enemy to all mankind. Children are raised by the community rather than by their parents because parents are thinking only of their own appetites when they conceive children. Children are raised in public nurseries, but parents are financially penalized if they burden society by bringing children for whom they cannot pay into the world. BY JOSEPH ZERE ...read more.