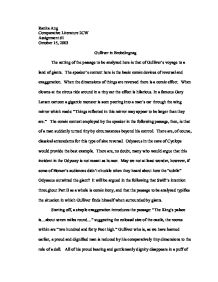 Ranita Ang Comparative Literature 2CW Assignment #1 October 15, 2003 Gulliver in Brobdingnag The setting of the passage to be analyzed here is that of Gulliver's voyage to a land of giants. The speaker's context here is the basic comic devices of reversal and exaggeration. When the dimensions of things are reversed there is a comic effect. When clowns at the circus ride around in a tiny car the effect is hilarious. In a famous Gary Larsen cartoon a gigantic monster is seen peering into a man's car through the wing mirror which reads: "Things reflected in this mirror may appear to be larger than they are." The comic context employed by the speaker in the following passage, then, is that of a man suddenly turned tiny by circumstances beyond his control. There are, of course, classical antecedents for this type of size reversal. Odysseus in the cave of Cyclops would provide the best example. ...read more.

Swift's imagery in this passage allowed allows the reader to see other human-like creature from the perspective of a very tiny person. It also demonstrates to the reader once again that Swift loves to engage in the humor of the disgusting and the impolite. When a group of Brobdingnagian beggars presses up against the carriage to view the strange little creature that is our speaker, Gulliver is able to observes the cancer on the breast of a beggar woman "...full of holes, in two or three of which I could have easily crept..." and body lice "...and their snouts with which they rooted like Swine." There is a misogynist quality to this joke. The breast of a woman is presented as disgusting rather than as an inspiration to art and poetry. The idea of crawling into a cancerous lesion on a woman's breast is an ugly parody of what men usually think about when they see the naked female breast which is to adore, kiss, or suck it. ...read more.

The important detail of the box's construction which will eventually allow for Gulliver's salvation by sailors is also carefully noted: "...On the fourth side, which had no windows, two strong staples were fixed...", and so on. There is a dual purpose to what we might call the "liar's emphasis" lavished on this passage. The first is to satirize the books of travelers tales so popular in Swift's days in which exact descriptions of fantastic creatures were given to fool the credulous. The second is to prepare the reader for Gulliver's eventual escape. This happens in his traveling box which is then conveniently destroyed by the sailors who rescue him so that no substantial evidence of his adventure remains, and the gullible can easily believe the whole story of Gulliver among the Brobdingnags. The comic irony is an effective device in satirizing human folly. The absurdity in the relationship between these two elements is essentially targeted at England (Gulliver), the Wigs, specifically, whereby Swift is attacking his opposition. In the spirit of Swift's famous word play about "...his good Master Bates", we can rename his fable "Gullible's Travels." ...read more.