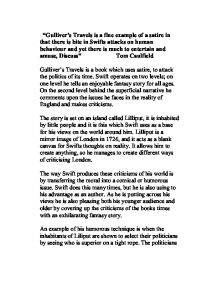 Gulliver's Travels is a fine example of a satire in that there is bite in Swifts attacks on human behaviour and yet there is much to entertain and amuse, Discuss

"Gulliver's Travels is a fine example of a satire in that there is bite in Swifts attacks on human behaviour and yet there is much to entertain and amuse, Discuss" Tom Caulfield Gulliver's Travels is a book which uses satire, to attack the politics of its time. Swift operates on two levels; on one level he tells an enjoyable fantasy story for all ages. On the second level behind the superficial narrative he comments upon the issues he faces in the reality of England and makes criticisms. The story is set on an island called Lilliput, it is inhabited by little people and it is this which Swift uses as a base for his views on the world around him. Lilliput is a mirror image of London in 1726, and it acts as a blank canvas for Swifts thoughts on reality. It allows him to create anything, so he manages to create different ways of criticising London. The way Swift produces these criticisms of his world is by transferring the moral into a comical or humorous issue. ...read more.

Its inhabitants are all a twelfth of his size. The book describes Gulliver's amazing adventures that lay before him. Throughout the story a great deal of ingratitude is shown in many different forms. When Gulliver urinates on the palace to extinguish a fire, even though Gulliver may see this as a good deed it is seen as a kind of insult by the Lilliputians. Gulliver is also shown ingratitude by the Lilliputians, after defeating an opposing fleet single handily and saving the palace from burning to the ground the inhabitants turn on Gulliver and decide to try and gauge his eyes out, this I feel is Swift attacking the simple mindedness of the human race and how easily judged some people are. Before I proceed to give an account of my leaving this kingdom, it may be proper to inform the reader of a private intrigue which had been for two months forming against me Jonathan Swift has filled this book full of Satire, on another level away from the humour he is pointing out and describing the criticisms of modern England and its faults. ...read more.

that's he is twelve times their size in every dimension Swift uses Gulliver's abnormal height to great use, without his height the book would not be what it has become, it is the base of many opinionated points behind the text. The Height helps to link in with the whole plot of ingratitude, when Gulliver defeats an entire fleet he is shown a great deal of congratulations, but when he extinguishes a fire in the royal palace by urinating on it the Lilliputians see him as a sort of traitor and treat him with complete ingratitude and ungratefulness. This is showing the pure simple mindedness of humans and Swift has created this with the foundation of size, by using a kind of unrealistic and humorous base he has created many different forms of putting across his feelings on modern day culture. This book shows great depth behind words, it shows that a book can contain more than it seems and Swift has shown this exceptionally well with the use of in depth thoughts and satire, with this combination he has created a superb book. This book backs up the saying You can't tell a book by its cover ...read more.