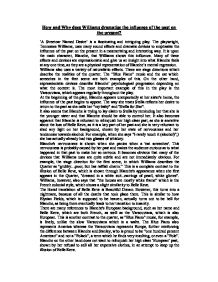 How and Why does Williams dramatise the influence of the past on the present?

How and Why does Williams dramatise the influence of the past on the present? 'A Streetcar Named Desire' is a fascinating and intriguing play. The playwright, Tennessee Williams, uses many sound effects and dramatic devices to emphasize the influence of the past on the present in a mesmerizing and interesting way. It is upon the main character, Blanche, that Williams shows this influence. Many of these effects and devices are expressionistic and give us an insight into what Blanche feels at any one time, as they are a physical representation of Blanche's mental regression. Williams also uses a variety of naturalistic effects. These are stage directions which describe the realities of the quarter. The "Blue Piano" music and the cat which screeches in the first scene are both examples of this. On the other hand, expressionistic devices describe Blanche' psychological progression depending on what the context is. The most important example of this in the play is the Varsouviana, which appears regularly throughout the play. At the beginning of the play, Blanche appears unexpectedly at her sister's home, the influence of the past begins to appear. The way she treats Stella reflects her desire to return to the past as she calls her "my baby" and "Stella for Star". ...read more.

There are many references to Blanche's European background, such as her name and Belle Reve, which are both French, as well as the Varsouviana, which is also European. This is another contrast to the quarter, as "Blue Piano" music, for example, is lively, unlike the slow Varsouviana which is a waltz. The Blue Piano also represents America whereas the Varsouviana represents Europe, further reinforcing the difference between Blanche and Stanley, who is proud to be "one hundred percent American" and not a "Polack", a term which he finds very insulting, or even a "Pole". Blanche on the other hand does not want to relinquish her high class 'European' past, shown by her refusal to sell all her expensive clothes, in an attempt to keep up the illusion of Belle Reve. Blanche also tries to maintain the illusion of youth because she is afraid that she will become less attractive as she ages. She hides from all light, and when Mitch finally realises this ("I don't think I ever seen you in the light"), he shines a light on her, representing the 'death' of her illusions, the possibility of getting married again, or Shep Huntleigh, who is probably a figment of her imagination, inviting her on "a cruise of the Caribbean". ...read more.

Williams also uses a variety of devices to emphasize the primitiveness of the men in the play. For example, the colours of their shirts which are "solid blue, a purple, a red and white check, a light green", are raw and unrefined like the men themselves. The colours reflect the men's nature and lack of subtlety. Williams himself describes them as "coarse and direct and powerful as the primary colours." Williams also uses literary devices to show the influence of the past on the present. In scene one, Blanch is told to take a streetcar named Desire, and then transfer to one called Cemeteries and ride six blocks and get off at - Elysian Fields." This shows a natural progression from Belle Reve, which symbolizes death, as shown in Blanche's monologue near the end of scene one, where she says that the "Grim Reaper had put up his tent on our doorstep...Belle Reve was his headquarters". From there she goes on to "Cemeteries" an then finally to "Elysian Fields", which was heaven in Greek mythology. In conclusion, it can be seen that Williams uses a variety of dramatic devices to very good effect to dramatise the influence of the past on the present. He often uses expressionistic devices to emphasise Blanche's descent into insanity, but also uses a variety of naturalistic devices for the same purpose. ...read more.

This essay responds to the first half of the question strongly, but the second averagely. There is a clear focus on how Williams uses techniques such as the Varsouviana and language to dramatise the presentation of the past and present. ...

This essay responds to the first half of the question strongly, but the second averagely. There is a clear focus on how Williams uses techniques such as the Varsouviana and language to dramatise the presentation of the past and present. However, I don't feel as if this essay gets to the crux of why Williams chooses to do this. I think examiners would be looking for the significance of the past becoming the foundations of Blanche's tragic downfall. This would allow the essay to look further into the genre, reaching the top bands of the assessment objective concerning context of reception and production. It is great to see a GCSE essay which can focus on techniques with fluency, but it's no good to answer a question like this with no argument whatsoever. You must be clear in arguing what Williams is trying to achieve, and with this you can offer insight into other interpretations. Being able to evaluate these interpretations will gain you credit, and I recommend you draw upon strengths of your main argument and weaknesses of the other ideas. Sitting on the fence is not the way forward!

The analysis here is good, but there needs to be more focus on the audience's response to techniques. This essay is able to pick up on a breadth of concepts which contribute towards dramatising the past and present, but some are better than others. For example the opening sentence "Blanche's nervousness is shown when she panics when a 'cat screeches'" has no immediate relevance to the question, and the point doesn't seem focused. It is key that you pick the best points and elaborate upon them thoroughly to get the top marks. Examiners won't appreciate lengthy responses which consist of mostly irrelevant points. The comment on Stanley not appreciating being called a "Polack" is a good point, but this could've been explored further. If I were answering this question, I would elaborate on this quote and discuss how Blanche's teasing of Stanley only makes the situation worse - making the tragedy more inevitable. Commenting "showing that she is still bitter about everything that has happened to her" after a quote is good, but it needs to be more detailed. As an examiner, I would be looking for some discussion of how the audience respond to such speech on stage.

This essay has a basic structure, and I feel there are too many paragraphs to form a succinct argument. The introduction is good, but the first sentence "Ã¢â‚¬ËœA Streetcar Named DesireÃ¢â‚¬â„¢ is a fascinating and intriguing play." could be omitted completely. I liked how the introduction offered an insight into the techniques, but as mentioned above there was no response to why Williams does so. Paragraphs shouldn't be one or two sentences long, and this shows signs of a candidate who cannot elaborate upon points or form a coherent argument. The style here reads well, with the argument having a logical flow. I feel to reach the top band, this essay needed to begin to link points and refer back to previous techniques and have an overarching argument. Spelling, punctuation and grammar are fine.