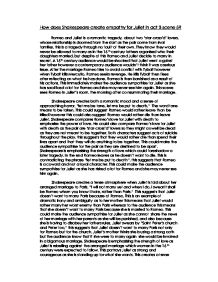 How does Shakespeare create empathy for Juliet in act 3 scene 5?

How does Shakespeare create empathy for Juliet in act 3 scene 5? Romeo and Juliet is a romantic tragedy, about two 'star-cross'd' lovers, whose relationship is doomed from the start as the pair come from rival families, this is a tragedy through no fault of their own. They know they would never be allowed to marry as in the 16th century fathers organised who their daughters married, but despite of this Romeo and Juliet decide to marry in secret. A 16th century audience would be shocked that Juliet went against her father however a contemporary audience wouldn't think it was a serious issue. After the marriage Romeo tries to avoid conflict with Tybalt however when Tybalt kills Mercutio, Romeo seeks revenge. He kills Tybalt then flees after reflecting on what he has done. Romeo is then banished as a result of his actions. This immediately makes the audience sympathise for Juliet as she has sacrificed a lot for Romeo and she may never see him again. This scene sees Romeo in Juliet's room, the morning after consummating their marriage. Shakespeare creates both a romantic mood and a sense of approaching horror. "let me be tane, let me be put to death," The word tane means to be taken. ...read more.

Lord Capulet changes moods through the scene. He starts off feeling sympathy for Juliet as he thinks she is crying about the death of her cousin, then he progresses into feeling confused which then turns into anger. Nearly all daughters in the 16th century would agree with the marriage and never rebel against their fathers. A 16th century audience would see Juliet as a very loyal lover to Romeo as she breaks her loyalty for her father however a contemporary audience will not see the strength of her love because arranged marriages aren't as common therefore people are unaware of the importance of them. The quote also shows that Lord Capulet treats Juliet like a possession; he wants her to marry Paris so he will receive a dowry which will expand his family wealth. It proves the lovers can never be together peacefully. Lord Capulet also shows his power by mimicking Juliet's objections "I cannot love I am too young" however the audience know that she can and does love and isn't too young to marry. This could make Juliet feel guilty for disobeying her father and it could also make her realise how much she has given up for Romeo. ...read more.

This makes the audience feel anxious as it gives a sense that something bad is going to happen to Juliet. It emphasises the power of love. A 16th century audience may feel that Juliet has made a mistake in choosing to marry Romeo. The mention of suicide which has been suggested throughout the play gives a sense of an approaching tragedy it suggests that Romeo and Juliet's fate is to be apart. Shakespeare uses the soliloquy at the end of the scene to express Juliet's feelings and to give the audience an idea of events to come. From the start of the play the fate of Romeo and Juliet is pre-determined, they are 'star-cross'd' lovers; there relationship is flawed through no fault of their own, this is a romantic tragedy. By the end of the scene Shakespeare makes us think that Juliet is a strong, courageous and determined character as she stands up for what she wants and doesn't back down. The changing moods shown throughout the scene makes us sympathise for Juliet as feelings of love, sadness and anger are shown throughout the scene, she has lost everyone close to her including Romeo and has no one to comfort her. The repeated suggestions of suicide throughout the scene could foreshadow a later tragedy. This makes us feel anxiety as well as sympathy towards Juliet. ...read more.