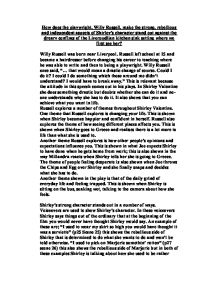 How does the playwright, Willy Russell, make the strong, rebellious and independent aspects of Shirley&amp;#146;s character stand out against the dreary confines of the Liverpudlian kitchen sink setting where we first see her?

How does the playwright, Willy Russell, make the strong, rebellious and independent aspects of Shirley's character stand out against the dreary confines of the Liverpudlian kitchen sink setting where we first see her? Willy Russell was born near Liverpool. Russell left school at 15 and became a hairdresser before changing his career to teaching where he was able to write and then to being a playwright. Willy Russell once said, "... that would mean a drastic change of course. Could I do it? I could I do something which those around me didn't understand? I would have to break away." This is relevant because the attitude in this speech comes out in his plays. In Shirley Valentine she does something drastic but doubts whether she can do it and no- one understands why she has to do it. It also shows that you can achieve what you want in life. Russell explores a number of themes throughout Shirley Valentine. One theme that Russell explores is changing your life. This is shown when Shirley becomes happier and confident in herself. Russell also explores the theme of how seeing different places affects you. This is shown when Shirley goes to Greece and realises there is a lot more to life than what she is used to. Another theme Russell explores is how other people's opinions and expectations influence you. ...read more.

Page 8 Scene 11 is a good example of Shirley's loud and strong character. In this scene her and her friends are joking about clitorises and Shirley is cracking jokes. On page 12 scene 15 Shirley and Joe are painting and they are fooling around. This shows Shirley's rebellious streak at not being bothered about being covered in paint. The next scene is also a good example of the way Shirley is different from other people. Her and Joe are in the bath together and she talks about them being "darin' young things". Close ups are used frequently in the film usually when Shirley is talking about her feelings in a soliloquy. These are used to show she is bold and strong. These also show that she is the main character. Soliloquies are used to show the way Shirley is thinking and feeling at a particular moment. Most of these are directed to the wall or the rock that Shirley talks to about her feelings. Shirley's independence is shown clearly threw these. Shirley knows herself that she is independent and can live without Joe. Shirley talks to the wall about leaving Joe and wanting to go to Greece. This shows that she is strong and knows she can do it. Interior and Exterior setting are used throughout the play. ...read more.

When Shirley is sarcastic towards Joe at the dinner table she sounds more like her strong character as Shirley Valentine rather than the weak unconfident person Joe has made her. She says to him "Well it looks like Chips an' egg to me - but maybe it's a trick question," this annoys Joe but instead of shutting up Shirley uses the rebellious side of her character to wind him up even more. Even when Joe throws his dinner over Shirley she doesn't begin to cower or act as if she is scared of him she stands up to him and is strong. Overall Shirley's strong character is brought out a lot more when she is away from Joe living her own life the way she wants it. Props are used in the play to show the way Shirley is feeling. In Liverpool when she Shirley is out shopping she has handfuls of shopping bags and is weighed down. When she is in Greece at the local market all Shirley is carrying is a small shopping bag. This shows the great weight that has been lifted from Shirley's shoulders since she went to Greece. Wine is also used to show Shirley's feelings when she is around different things. When Shirley has a glass in her she feels happy as if she has treated herself. It also shows the rebellious side of the old Shirley Valentine peeping through. ...read more.