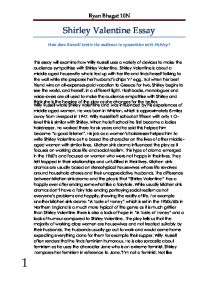 Shirley Valentine. How does Russell invite the audience to sympathise with Shirley?

Shirley Valentine Essay How does Russell invite the audience to sympathise with Shirley? This essay will examine how w***y Russell uses a variety of devices to make the audience sympathise with Shirley Valentine. Shirley Valentine is about a middle aged housewife who is fed up with her life and finds herself talking to the wall while she prepares her husband's chips 'n' egg. But when her best friend wins an all-expenses-paid vacation to Greece for two, Shirley begins to see the world, and herself, in a different light. Flashbacks, monologues and voice-overs are all used to make the audience empathise with Shirley and think she is the heroine of the play as she changes for the better. w***y Russell wrote Shirley Valentine and was influenced by his experiences of middle aged women. He was born in Whiston, which is approximately 8 miles away from Liverpool in 1947. w***y Russell left school at fifteen with only 1 O-level this is similar with Shirley. When he left school he first became a ladies hairdresser. He worked there for six years and he said this helped him become "a good listener". His job as a women's hairdresser helped him to write Shirley Valentine as he based the character on the lives of other middle-aged women with similar lives. Kitchen sink drama influenced the play as it focuses on working class life and social realism. This type of drama emerged in the 1960's and focused on women who were not happy in their lives. They felt trapped in their relationships and unfulfilled in their lives. Kitchen sink dramas are usually based on stereotypical housewives whose life revolves around household chores and their unappreciative husbands. The difference between kitchen sink drama and the play is that "Shirley Valentine" has a happily ever after ending somewhat like a fairytale. While usually kitchen sink dramas don't have a fairy tale ending portraying social realism as not everyone's problems end happily, showing the reality of life. ...read more.

Costas is a caricature of a Greek man he tries his lines on all foreign middle-aged women. However, Shirley is not bothered if he uses his chat up lines on every middle-aged woman because she is not in love with Costas she just likes having someone compliment her so she feels good about herself unlike when she's back home in Liverpool. Plus she has "fallen in love with the idea of living". Costas helped Shirley to recover from the life she was leading in Liverpool, and he has helped her to realise her full potential in life as she did not have a complete life in Liverpool she wanted to do more in her life and grow as a person. Shirley is a changed women compared to what she was before. A character who helped Shirley to change is Jane. Jane left Shirley by herself and ran off with a man in the plane which shows she is fickle as she is an extreme feminist but quickly changes her thoughts when a man is interested. But Jane uses Shirley and is disgusted when Shirley demonstrates independence. This leaves Shirley alone in Greece and she learns to survive by herself, and to deal with people. At first she was lonely and spoke to the rock she was used to this as she is lonely in Liverpool and spoke to the wall this made the audience feel sorry for Shirley "That's rock we met the first day I got here" this makes us sympathise with Shirley because wherever she goes she still feels lonely and does not have the confidence in life to go and make real friends instead of virtual ones. However, later on in the play she talks to people, not objects. That helps Shirley rebuild herself and makes her more positive. When Jane left Shirley by herself Shirley became self reliant and more independent. ...read more.

he has made Shirley feel perfect, even her stretch marks were "lovely because they are a part of you" these compliments boost her confidence which help Shirley to feel independent and free it also makes her confidence sky high. In Liverpool Shirley felt trapped but with the sense of space and that she is free reminds us of the change that she made from "the girl that used to be me that used to be free" Shirley has gone back to what she was previously loved for. During her short two weeks stay in Greece Shirley Bradshaw transformed back into Shirley Valentine. Finally to conclude w***y Russell uses such as (social, historical and literary) context, dramatic devices (voiceovers, monologues and flashbacks), minor characters, setting, scenes to make the audience sympathise with Shirley Valentine. Firstly he involves his own personal experience in Shirley Valentine's lifestyle as they both left school with poor academic grades. He also made Shirley Bradshaw a stereotypical wife in those times and he made Joe a stereotypical chauvinist housewife. Another way Russell makes us sympathise with Shirley is the uses of dramatic devices as he makes the audience connect with Shirley and step into her shoes and see how she really lives her life. In addition to that Russell uses minor characters to make us sympathise with Shirley as he shows how all the minor characters use her such as Joe and Milandra plus he showed without all the discouraging characters around her she is a completely different person and has great confidence. Russell also uses setting as when Shirley is very bored and depressed he conveys this in the weather as in Liverpool the weather was always cloudy or rainy however when she is having loads of fun in Greece the weather is warm and sunny. Finally Russell uses scenes to sympathise with Shirley as Russell made the focus of the play not her life in Liverpool but her reinvention of Shirley's character in Greece. As the purpose of the play is to show Shirley's transformation. ?? ?? ?? ?? Ryan Bhagat 10N ...read more.