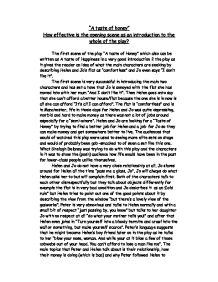 "A taste of honey" How effective is the opening scene as an introduction to the whole of the play? The first scene of the play "A taste of Honey" which also can be written as A taste of Happiness is a very good introduction 2 the play as it gives the reader an idea of what the main characters are seeking by describing Helen and Jo's flat as "comfortless" and Jo even says "I don't like it". The first scene is very successful in introducing the main two characters and has set a tone that Jo is annoyed with the flat she has moved into with her mum "And I don't like it". ...read more.

The audiences that would of watched this play were used to seeing more elite sets on stage and would of probably been gob-smacked to of seen a set like this one. What Shelagh Delaney was trying to do with this play and the characters in it was to show the (posh) audience how life would have been in the past for lower-class people unlike themselves. Helen and Jo do not have a very close relationship at all, Jo slaves around for Helen all the time "pass me a glass, Jo", Jo will always do what Helen asks her to but will complain first. Both of the characters talk to each other disrespectfully but they talk about objects differently for example the flat is in very bad condition and ...read more.

and after that Helen even joins in "Turn yourself into a bloody termite and crawl into the wall or something, but make yourself scarce". Peter's language suggests that he might become Helen's boy friend later on in the play as he talks to her "blow your nose, woman. And while your at it blow a few of those cobwebs out of your head. You can't afford to lose a man like me". The main topics that Peter and Helen talk about is their relationship, how their money is doing (which is bad) and why Peter followed Helen to Manchester. This kind of gives the impression that their relationship is going wrong and they are trying to make it better even though it has already in the past. ?? ?? ?? ?? ...read more.