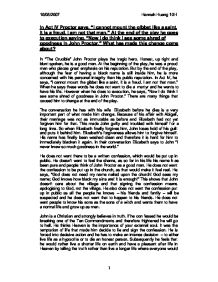 In Act IV Proctor says, &quot;I cannot mount the gibbet like a saint. It is a fraud. I am not that man.&quot; At the end of the play he goes to execution saying, &quot;Now I do think I see some shred of goodness in John Proctor.&quot; What has made this change come about?

John is a Christian and strongly believes in truth. If he confessed he would be breaking one of the Ten Commandments and therefore frightened he will go to hell. He thinks Heaven is the importance of your external soul. It was the temptation of life that made him decide to lie and sign the confession. He is forced into decisive action and he has to make an intense decision - to either live life as a hypocrite or to die an honest person. Subsequently he feels that he would rather live a shorter life on earth and have a pleasant after life in Heaven by telling the truth rather than live a longer life where everyone would believe you were a criminal and go to Hell. He felt unworthy during the play but he is now meritorious of doing a good thing. John feels that he lives in an unjust society and now he has the opportunity to do something about the witchcraft hysteria. He has always been a quiet complainer and now he has the chance to change the society. His death made people realise that they have gone overboard with the witchcraft hysteria. ...read more.

Also the authorities desire for more names makes him realise how evil authority have become and therefore admires people who dies for the truth. He would not be able to live with himself knowing that other innocents died while he quaked at death's door and fled. John's immense pride and fear of public opinion compelled him to withhold his adultery from the court, but by the end of the play he is more concerned with his personal integrity than his public reputation. He still wants to save his name, but for personal and religious, rather than public, reasons. John's refusal to provide a false confession is a true religious and personal stand. Such a confession would dishonour his fellow prisoners, who are brave enough to die as testimony to the truth. Perhaps more relevantly, a false admission would also dishonour him, staining not just his public reputation, but also his soul. By refusing to give up his personal integrity John implicitly proclaims his conviction that such integrity will bring him to heaven. He goes to the gallows redeemed for his earlier sins. As Elizabeth says to end the play, responding to Hale's plea that she convince John to publicly confess: "He have his goodness now. God forbid I take it from him!" 10/05/2007 Hannah Huang 10H 1 ...read more.