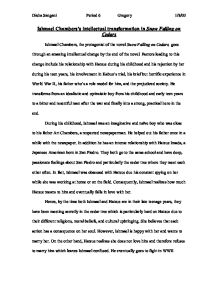 Ishmael Chambers's intellectual transformation in Snow Falling on Cedars Ishmael Chambers, the protagonist of the novel Snow Falling on Cedars, goes through an amazing intellectual change by the end of the novel. Factors leading to this change include his relationship with Hatsue during his childhood and his rejection by her during his teen years, his involvement in Kabuo's trial, his brief but horrific experience in World War II, his father who's a role model for him, and the prejudiced society. He transforms from an idealistic and optimistic boy from his childhood and early teen years to a bitter and resentful man after the war and finally into a strong, practical hero in the end. During his childhood, Ishmael was an imaginative and na�ve boy who was close to his father Art Chambers, a respected newspaperman. ...read more.

She believes that each action has a consequence on her soul. However, Ishmael is happy with her and wants to marry her. On the other hand, Hatsue realizes she does not love him and therefore refuses to marry him which leaves Ishmael confused. He eventually goes to fight in WWII against the Japanese; meanwhile, Hatsue and her family are transferred to a Japanese internment camp. During this time, Hatsue decides to end the relationship in a letter after inferring that she not only deceived her family, but herself as well. Subsequently, she also falls in love with Kabuo and eventually marries him. The letter infuriates and confuses Ishmael causing his hatred for not only Hatsue but also all the Japanese Americans in general. ...read more.

Ishmael's decision to act is a heroic one, since it demonstrates his newfound moral superiority compared to the other islanders who remain mired in silence and prejudice. Moreover, sitting in his father's chair, Ishmael finds the strength to fill the place left vacant by his father's death. Therefore, Ishmael goes through a striking transformation in which he goes from an optimistic and idealistic boy to a cold and antisocial man after the war and finally into a strong leader in the end. Ishmael also finally abandons his na�vet� and idealism, accepting that the world is an imperfect place ruled as much by accident, chance, and fate as it is by choice. Ishmael chooses to live up to Mr. Fukida's belief that his "heart is strong" and to fulfill Hatsue's prophecy that he will "do great things." Disha Sangani Period 6 Gregory 1/8/03 ...read more.