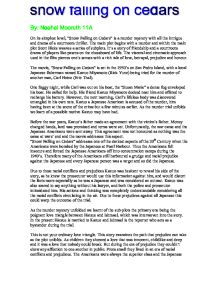 On its simplest level, &quot;Snow Falling on Cedars&quot; is a murder mystery with all the intrigue and drama of a courtroom thriller.

By: Neehal Mooruth 11A On its simplest level, "Snow Falling on Cedars" is a murder mystery with all the intrigue and drama of a courtroom thriller. The main plot begins with a murder and within the main plot Scott Hicks weaves a series of subplots. It's a story of friendship and a courtroom drama of players like pawns on the chessboard of life. The visceral and cinematic approach used in the film pierces one's senses with a rich tale of love, betrayal, prejudice and honour. The movie, "Snow Falling on Cedars" is set in the 1950's on San Pedro Island, with a local Japanese fisherman named Kazuo Miyamoto (Rick Yune) being tried for the murder of another man, Carl Heine (Eric Thal). One foggy night, while Carl was out on his boat, the "Susan Marie" a dense fog enveloped his boat. He called for help. His friend Kazuo Miyamoto docked near him and offered to recharge his battery. However, the next morning, Carl's lifeless body was discovered entangled in his own nets. Kazuo a Japanese American is accused of the murder, him having been at the scene of the crime but a few minutes earlier. ...read more.

This is not your ordinary love triangle. This story examines the path that prejudice can take as the plot unfolds. As children they showed a love that was innocent, childlike and deep and it was a love that nobody could break. But during the era of prejudice they couldn't show any affection to one another in public. From small they lived in an era of racial conflicts and prejudices. The Americans were always the superior class and the Japanese were the under dogs, as they worked on the strawberry farms picking strawberries. Thus they were forced to hide among the cedar trees, run in the rain when no one else was around, and play along the desolate ocean's shore. From al little girl, Hatsue was taught and compelled by her mother to find and marry a Japanese man, and due to these family pressures she couldn't be seen with Ishmael. That is why they always met in secret and hid between the cedar trees not to reveal their relationship to the public, as both Hatsue's parents and Ishmael's parents would disapprove. ...read more.

This symbolized that Hatsue was a great part of his life and she completed him and now that she has left him he had lost a part of himself. He unfortunately saw the consequences of their relationship if it continued but still was arrogant and wished to continue. As the movie continued Ishmael still carried the grudge against Hatsue for inexplicably ending their relationship because he is overwhelmed and overcome by his emotions. At the same time, memories of his dead father, Arthur one of the most respected men in the community and a pillar of integrity, haunts his thoughts. He remembers and understands his father's words, "journalism is making choices". It's only after he embraces his father's values is he able to find peace. Ishmael then revealed the new evidence and Kazuo was then declared innocent, at the same time Ishmael let go of Hatsue but he still held her close to his heart. I personally believe "Snow Falling on Cedars" is a poignant and beautifully haunting tale of love and murder, which will stand the test of time and be enjoyed by generations to come. The words of the judge (James Cromwell) are food for thought: "accident rules every part of the universe except maybe the chambers of the human heart". ...read more.