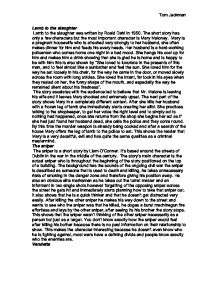 Lamb to the slaughter

Lamb to the slaughter Lamb to the slaughter was written by Roald Dahl in 1950. The short story has only a few characters but the most important character is Mary Maloney. Mary is a pregnant housewife who is attached very strongly to her husband, she often makes dinner for him and feeds his every needs. Her husband is a hard-working policeman who comes home one night in a bad mood. She hangs his coat up for him and makes him a drink showing that she is glad he is home and is happy to be with him this is also shown by "She loved to luxuriate in the presents of this man, and to feel almost like a sunbather and feel the sun. She loved him for the way he sat loosely in his chair, for the way he came in the door, or moved slowly across the room with long strides. ...read more.

This shows the reader that Mary is a very deceitful, evil and has quite the same qualities as a criminal mastermind. The sniper The sniper is a short story by Liam O'Conner. It's based around the streets of Dublin in the war in the middle of the century. The story's main character is the actual sniper who is throughout the beginning of the story positioned on the top of a building. The background has the sounds of the ongoing civil war the sniper is described as someone that is used to death and killing, he takes unnecessary risks of smoking in the danger zone and therefore giving his position away. He also an obvious elite marksmen as he takes out the turret master and an informant in two single shots however forgetting of the opposing sniper across the street he gets hit and immediately starts planning how to take that sniper out. ...read more.

The mother of Antoine is so upset of her sons passing that she vows revenge against her son's killer. The mother is almost described as obsessive over her son's death and begins a sick and twisted way of acting out the revenge on Nicholas. She trains her sons dog to attack a dummy after starving it for two days, she then would reward the dog with a piece of meat that the dog could smell. She became fixated on killing the murderer and could think of nothing else. When she went to carry out the killing she planned it so that she would be in disguise and look like a beggar. Mary is described as a very cruel and evil women obsessed with her version of justice. When, at the end of the story the writers put "That night she slept well" it shows that she thinks everything is as it should be and that there is a balance or vengeance once again. ?? ?? ?? ?? Tom Jackman ...read more.