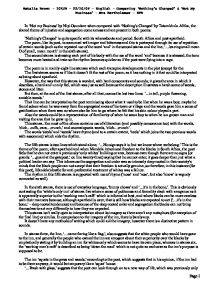 In 'Not my Business' by Niyi Osundare when compared with 'Nothing's Changed' by Tatamkhula Afrika, the shared theme of injustice and segregation come across and are present in both poems. 'Nothing's Changed' is quite specific with its whereabouts and period: South Africa and post-apartheid. The poem, like its poet, is consumed with anger and bitterness and this is portrayed through its use of repetition of certain words (such as the repeated use of the word 'and' in the second stanza and the line, '...leaving small mean O of small, mean mouth' in the sixth stanza). The second stanza is stressing each part of his body with the use of the word 'and' because it is stressed; the tone becomes more heated and irate so the rhythm becomes quicker as if the poet were flying into a rage. The poem is in mainly-eight-line stanzas which each transpire developments in the plot (except for the The first stanza seems as if like it doesn't fit the rest of the poem; as it has nothing in it that could be interpreted as being about apartheid. However, the way that this stanza is worded, with hard consonants and sounds; it gives the area in which it describes, a hard and unruly feel, which was just as well because the description illustrates a harsh scene of weeds, stones and litter. ...read more.

In stanza three, the line, '...name flaring like a flag,', also suggests that the white people who would have gone to the inn, and generally the people who owned the inn are arrogant about their superiority over the blacks by emphatically stating it by building an inn for whites only which seems to have its own place, whereas in stanza six, the 'working man's caf�' is described as being 'down the road' which is not quite as exclusive as the inn's purpose is supposed to be. The inn 'squats in the grass and weeds,' according to the poet, which suggests that in his opinion, if the inn had to be there anyway, it would be temporary like a 'squat' house. '...Brash with glass,' suggests that the poet can look through on to a new way of life, which was previously only his and his kind's idealist view but still, the glass acts as a barrier still, preventing him from entering this new life under Mandela's time in power. The word 'brash' also implies that the said barrier is very obvious about being there and separating the two races. However, in the last stanza, although the anger that is portrayed through 'leaving small mean O of small, mean mouth. ...read more.

The character/poet in 'Nothing's Changed', however, does not defy his people as the character did in 'Not My Business' because he (the former character) seemed to feel stronger about his cause than the latter did; as the latter only appeared to be concerned with his own well-being ('What business of mine is it so long as they don't take the yam from my savouring mouth?'). Along these same lines, 'Not My Business' also has a running religious interpretation with its three denials of the victims who ultimately may perhaps have saved the character from his fate in the fourth stanza. The poem follows the lines of the story of Peter's three denials of Christ in the New Testament in the Bible, when it was Christ who would have sanctified him. Another interpretation of the three denials is when related with Charles Dickens' 'A Christmas Carol', when the three spirits visited Scrooge and gave him reasons and chances to change his hostile and cruel ways. So, as a parallel: when each of the victims were attacked and the main character in the poem hindered them; it was another chance which was wasted and eventually led to the fate that Scrooge would have had, had he not had heeded the spirits pleas. ...read more.