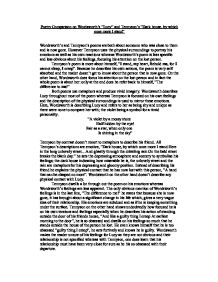 Poetry Comparison on Wordsworth's "Lucy" and Tennyson's "Dark house, by which once more I stand" Wordsworth's and Tennyson's poems are both about someone who was close to them and is now gone. However Tennyson uses the physical surroundings to portray his emotions as well as his own reactions whereas Wordsworth's poem is less specific and less obvious about his feelings, focusing his attention on the lost person. Tennyson's poem is more about himself, "I stand, my heart, Behold me, for I cannot sleep, I creep". Because he describes his own actions, the poem is very self absorbed and the reader doesn't get to know about the person that is now gone. On the other hand, Wordsworth does focus his attention on the lost person and in fact the whole poem is about her: only at the end does he refer back to himself, "The difference to me!" Both poems use metaphors and produce vivid imagery. Wordsworth describes Lucy throughout most of the poem whereas Tennyson is focused on his own feelings and the description of the physical surroundings is used to mirror these emotions. ...read more.

Wordsworth on the other hand doesn't describe any physical contact with Lucy. Tennyson dwells a lot through out the poem on his emotions whereas Wordsworth's feelings are less apparent. The only obvious mention of Wordsworth's feelings is in the last line, "The difference to me!" he states that because she is now gone, it has brought about a significant change in his life which, gives a very vague idea of their relationship. His emotions are subdued and as if he is keeping something under the surface. Tennyson on the other hand shows undoubtedly how focused he is on his own tensions and feelings especially when he describes his action of standing outside the door of his friends house, "And like a guilty thing I creep At earliest morning to the door", he is so obsessed and dwells on his feelings so much that he stands outside the house of the person he lost. He even knows himself that he is too obsessed "guilty thing I creep", he acts furtively and knows he is guilty. ...read more.

This makes the poem flow smoothly giving a calm atmosphere. However instead of the standard one pair of rhymes that a ballad has, Wordsworth has made it two, resulting in two pauses and is therefore less of a narrative poem and more of a description then a sequence of actions like Tennyson's poem. In comparison, the basic meter in Tennyson's poem is iambic tetrameter with irregular stresses such as the two long stresses at the beginning, "Dark house," resulting in a slower and heavy atmosphere which portrays how he feels. He also uses enjambment rather then pauses at the end of each line like Wordsworth, as he is narrating his actions and again producing a gloomy effect. To conclude, the poems have their similarities but the main difference is how the emotions are portrayed -Tennyson's furtive behaviour as well as the morbid surroundings and Wordsworth's subtle description of Lucy and her life. In the end it is clear that they both feel that they have lost someone important and it has made a difference to their lives. ...read more.