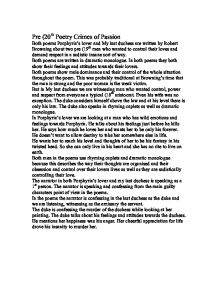 Porphyria&amp;#146;s lover and My last duchess by Robert Browning

Pre (20th Poetry Crimes of Passion Both poems Porphyria's lover and My last duchess are written by Robert Browning about two pre (19th men who wanted to control their loves and demand respect in a s******c insane sort of way. Both poems are written in dramatic monologue. In both poems they both show their feelings and attitudes towards their lovers. Both poems show male dominance and their control of the whole situation throughout the poem. This was probably traditional at Browning's time that the man is strong and the poor woman is the weak victim. But in My last duchess we are witnessing man who wanted control, power and respect from everyone a typical (18th aristocrat. ...read more.

Both men in the poems use rhyming caplets and dramatic monologue because this describes the way their thoughts are organised and their obsession and control over their lovers lives as well as they are sadistically controlling their love. The narrator in both Porphyria's lover and my last duchess is speaking as a 1st person. The narrator is speaking and confessing from the main guilty characters point of view in the poems. In the poems the narrator is confessing in the last duchess as the duke and we are listening, witnessing as the emissary the servant. The duke is confessing the murder of the duchess while looking at her painting. ...read more.

Her love was getting stronger, his insanity was growing stronger telling him to dedicate something creative and twisted for their love so he killed her In both Porphyria's lover and my last duchess there are two heroines who both are victims of evil insane men who for the most twisted reason murder them, yet love is not a reason to kill but to live for. Both Porphyria and the duchess are victims of evil and wrong we don't know much about their characters fighting for good or justice or representing either of the two. But because they are at the opposite or opposing end of evil this makes the duchess and Porphyria representing good. This makes them heroines and good where as the duke and lover are evil so they are the badies. This makes a power struggle between good and evil. ...read more.