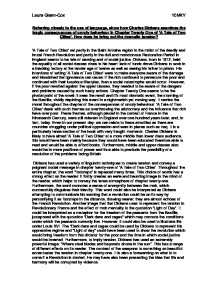 Referring closely to the use of language, show how Charles Dickens examines the tragic consequences of unruly behaviour in Chapter Twenty One of 'A Tale of Two Cities'. How does he bring out the dramatic tension?

Referring closely to the use of language, show how Charles Dickens examines the tragic consequences of unruly behaviour in Chapter Twenty One of 'A Tale of Two Cities'. How does he bring out the dramatic tension? 'A Tale of Two Cities' set partly in the Saint Antoine region in the midst of the deadly and brutal French Revolution and partly in the dull and monotonous Restoration Period in England seems to be tale of warning and of social justice. Dickens, born in 1812, held the equality of all social classes close to his heart: lack of funds drove Dickens to work in a blacking factory at the tender age of twelve as well as seeing his father to prison. His intentions of writing 'A Tale of Two Cities' were to make everyone aware of the damage and bloodshed that ignorance can cause: if the rich continued to persecute the poor and continued with their luxurious lifestyles, then a social catastrophe would occur. However, if the poor revolted against the upper classes, they needed to be aware of the dangers and problems caused by such hasty actions. Chapter Twenty One seems to be the pivotal point of the novel; it sees the revolt and it's most dramatic event, the storming of the Bastille, vividly depicting this event in a nightmarish yet moving way. ...read more.

For example, the quotation, spoken by Madame Defarge, "What! We can kill as well as the men when the place is taken!" The quotation is spoken in a very clear and determined way, with a feminist attitude. This reveals her anticipation to murder and commit sin, which prepares the audience for what is to come by presenting her as an unpredictable and radical female: an image which she sustains throughout the novel, particularly in the gruesome and heartless murder of the guard where Dickens represents her as being gleeful and taking great pleasure in committing this deadly act. The effect of the speech is evident; it moves the reader to view Madame Defarge in an entirely different light: whereas before she was not particularly kind, she was likeable, yet when it comes to the storming of the Bastille, she becomes utterly cold-blooded and evil in her approach which makes the reader dislike her from that moment on. Therefore, the reader's sympathy, having previously been focused on the lower classes, is shifted towards the aristocracy when they witness a cruel and motiveless attack on a prison guard. Charles Dickens uses description liberally throughout Chapter twenty-one to recreate the atmosphere of Saint Antoine in the midst of the Revolt and also to explore the outcome of rebellious and disorderly conduct. The description of the angry mob revolting against authority is particularly effective to reveal to the reader the outcome of such misbehaviour and to expose the mood and atmosphere of Saint Antoine. ...read more.

Dickens depicts the mob as 'dangerous' and endeavours, through subtle choices of language and imagery, to warn away British lower classes from attempting such a gory and bloody way to achieve equal treatment. At the end of the Chapter, Dickens ends on a sombre note, with an ominous forewarning of what is to come for England, should a Revolution occur: and once crimes are committed, hands 'Are not easily purified when once stained red'. The novel is Dickens' political comment of the state of our country, comparing it to such a time of terror and unrest in France would hit home, forcing political leaders to take note and act upon Dickens' caution. By raising the profile of such an atrocity that he believes could occur in Britain, he inspired citizens to do anything within their power to prevent it. Even in the Twenty-First century, we can still learn from Dickens' novel and also do what is in our power to end poverty, wars and racism. Evidence of the world's desire to end these horrors can be found in such things as the 'Stop Poverty Now' campaigns, in which celebrities click their fingers every three seconds to represent how often a child dies from poverty. Having celebrities to promote the cause, who have such an influence over so many people is likely to help encourage many more people to do what is in their power to end such horrific things. ?? ?? ?? ?? Laura Glenn-Cox 10MKY ...read more.