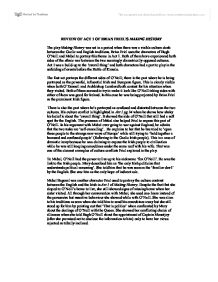 REVIEW OF ACT 1 OF BRIAN FRIEL'S MAKING HISTORY The play Making History was set in a period when there was a visible culture clash between the Gaelic and English traditions. Brian Friel uses the characters of Hugh O'Neill and Mabel to portray this theme in Act 1. Both of them have experienced both sides of the ethnic war between the two seemingly diametrically opposed cultures. Act I was a build-up to the 'overall thing' and both characters had a part to play in the unfolding of events before the Battle of Kinsale. The first act portrays the different sides of O'Neill; there is the part where he is being portrayed as the powerful, influential Irish and European figure. This is clearly visible when both O'Donnell and Archbishop Lombard both contest for his attention when they visited. ...read more.

That was one of the clearest examples of culture conflicts Friel explored in the play. To Mabel, O'Neill had the power to live up to his nickname 'fox O'Neill'. He was the link to the Irish people. Mary described him as 'the only Irish politician that understands political reasoning'. She told him that he was seen as the 'familiar devil' by the English. She saw him as the only hope of indirect rule. Mabel Bagenal was another character Friel used to portray the culture contrast between the English and the Irish in Act 1 of Making History. Despite the fact that she eloped to O'Neill's home to live, she still showed signs of missing home when her sister visited. All through her conversation with Mabel, she used one-liners instead of the persuasive but assertive behaviour she showed while with O'Neill. ...read more.

Her intelligence was highlighted in the argument with O'Neill about forming a coalition with Spain to attack England. This was Friel's way of showcasing her intelligence to the average spectator. She basically brought the audience back to what transpired in Scene 1 during the visit of Archbishop Lombard and Hugh O'Donnell even though she wasn't around at that time. Friel used her suspicion to explain the main intention of Lombard ('Rome and Roman power') and O'Donnell ('cattle raiding on international scale') Examining the characters of both Hugh O'Neill and Mabel Bagenal in Act 1 simultaneously, one is easily drawn to the fact that Friel used their relationship to explore the feasibility of the two cultures. It was a symbol of hope for reconciliation of the two cultures when she announced to him that she had a baby. The fact that the news that disrupted their moment of reconciliation goes to symbolise an end to the dream of blending the English and the Gaelic cultures. ...read more.