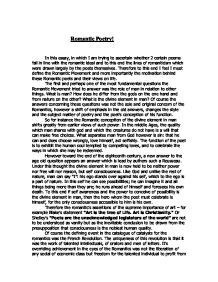 Romantic Poetry! In this essay, in which I am trying to ascertain whether 2 certain poems fall in line with the romantic ideal and to this end the lines of romanticism which were drawn largely by the poets themselves. Therefore to this end I feel I must define the Romantic Movement and more importantly the motivation behind these Romantic poets and their views on life. The first and perhaps one of the most fundamental questions the Romantic Movement tried to answer was the role of man in relation to other things. What is man? How does he differ from the gods on the one hand and from nature on the other? What is the divine element in man? Of course the answers concerning these questions was not the sole and original concern of the Romantics, however a shift of emphasis in the old answers, changes the style and the subject matter of poetry and the poet's conception of his function. So for instance the Romantic conception of the divine element in man shifts greatly from earlier views of such power. In the middle Ages, the quality which man shares with god and which the creatures do not have is a will that can make free choices. What separates man from God however is sin: that he can and does choose wrongly, love himself, act selfishly. The function of the poet is to exhibit the human soul tempted by competing loves, and to celebrate the ways in which she may be redeemed. However toward the end of the eighteenth century, a new answer to the age old question appears an answer which is lead by authors such a Rousseau. Under this thought the divine element in man is now held to be neither power nor free will nor reason, but self consciousness. Like God and unlike the rest of nature, man can say "I": his ego stands over against his self, which to the ego is a part of nature. ...read more.

But, the speaker says, even if men could "scorn / Hate and pride and fear," and were born without the capacity to weep, he still does not know how they could ever approximate the joy expressed by the skylark. Calling the bird a "scorner of the ground," he says that its music is better than all music and all poetry. He asks the bird to teach him "half the gladness / that thy brain must know," for then he would overflow with "harmonious madness," and his song would be so beautiful that the world would listen to him, even as he is now listening to the skylark. So what is the relevance of the skylark? It is Shelly's natural metaphor for pure poetic expression, the "harmonius madness" of pure inspiration. The Skylarks song issues from a state of purified existence, a notion of complete unity with heaven through nature; its song is motivated by the joy of the uncomplicated purity of being, and is unmixed with any hint of melancholy as human joy so often is. The skylark's song rains down upon the world, surpassing every other beauty. The Skylark is a "spirit" invisible in the sky, the bird sings and flies free of all human error and complexity, and while listening to its ong the poet feels free of these things too. So what bearing does this have upon the poem as a Romantic one? Well the first and perhaps most obvious is the poems connection to nature, which as I described earlier was a central theme to most romantic poetry of the time. It is also a study of untamed nature as the skylark is not something that can be easily caught; it is not a tactile being, but rather one on the edge of our atmosphere and our imaginations. It would be described even perhaps as a near mythical creature. Another obvious trait that this poem shares with the romantic idea ia its spontaneity. ...read more.

When autumns harvest occurs, the fields will be bare; the swathes with there "twined flowers" will be cut down. But the connection of the harvest to a cycle softens the tragedy. In time spring will come again, the fields will grow again and the birdsong will return. This is an elaborate metaphor for spirit of Romanticism which the poets felt would always come round again, because there was such a nee for conveyers of conscience such as themselves in the world. What makes "To Autumn" a beautiful poem is that it brings an engagement with the connection out of the realm of mythology and fantasy into the real world. This after all was a device the Romantics were trying to convey. A final aim that the romantics had which Keats fulfills exceptionally is the association of human moods with nature. The lazy almost lethargic pace of the poem and richness of down make the reader of the poem fell almost weighted down with the "flowers for the bees" and "the mossed cottage trees." Keats has extreme success in making the reader feel the laziness of the season and in doing so reflecting the "mood" of the season with the mood of people within that season. Keats and Shelley both successfully fall into the category of Romantic poets and the general ethos of Romanticism, as I have shown above in slightly differing ways. However they are very similar in showing the current of freedom running through both poems, basking in the now highly exulted position of intellectuals after the revolution in France. Both are extremely good poems and perhaps did not get the recognition they deserved during there lifetimes as some such as Lord Byron did, what is clear however is that both Keats and Shelley were instrumental in defining the role of the poet in that time and what they should stand for. 3226 words Jordan Anderson 12NCR Mr. Saunders ...read more.