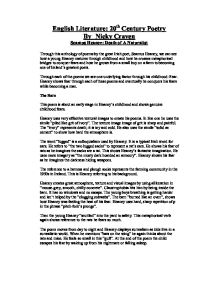 Seamus Heaney - Death of A Naturalist

English Literature: 20th Century Poetry By Nicky Craven Seamus Heaney: Death of A Naturalist Through this anthology of poems by the great Irish poet, Seamus Heaney, we can see how a young Heaney matures through childhood and how he crosses metaphorical bridges to conquer fears and how he grows from a small boy on a farm to becoming one of Ireland's greatest poets. Through each of the poems we see one underlying factor through his childhood: Fear. Heaney shows fear through each of these poems and eventually he conquers his fears while becoming a man. The Barn This poem is about an early stage in Heaney's childhood and shows genuine childhood fears. Heaney uses very effective textural images to create his poems. In line one he uses the simile "piled like grit of ivory". The texture image image of grit is sharp and painful. The "ivory" represents death; it is icy and cold. He also uses the simile "solid as cement" to show how hard the atmosphere is. The word "lugged" is a colloquialism used by Heaney. It is a typical Irish word for ears. He refers to "the two lugged sacks" to represent a rat's ears. He shows his fear of rats as he imagines the sacks are a rat. This shows Heaney's fantastic imagination. He uses more imagery as "the musty dark hoarded an armoury". Heaney shows his fear as he imagines the darkness hiding weapons. The reference to a harness and plough socks represents the farming community in the 1950s in Ireland. ...read more.

The young boy "sickened, turned and ran." He isn't mature enough to accept the reality. The Early Purges Again Heaney shows fear, this time his fear is of death. Even from the title this is shown. The "purge" is used when something is killed for a reason, for example when something has to be put down. But what makes this different is that Heaney shows an acceptance of the reasons for killing the kittens. At the time of the kittens being drowned Heaney could have only been about six years of age. It was the first time he had seen this being done. "The scraggy wee shits" is an ingenious term to use because it is a realistic thing that a man like Dan would say. This also shows the Northern Irish background of Heaney's upbringing. Heaney accepts that Dan was just doing what he had to. Again Heaney uses imagery by describing the "frail, metal sound". When he hears the "scraping" sound it is as if the kittens are metaphorically scrapping on his conscience and he feels guilt for their deaths. He also hears the "tiny din" showing how weak the kittens are against the world. Heaney uses Irish words like "soused" and "sogged remains" as texture images to show how the kittens are drowned. He shows how they are treated like vermin by being "slung" as if they are worthless. When Dan says "sure isn't it better for them now" he is rationalising the situation to justify himself to the boy. ...read more.

The silence highlights the early morning mission. The cows are still asleep, "cuddling, watching and knowing". "Rails scored a bulls eye", shows a shooting target. The hoarse sentry shows another military image. Heaney imagines he is a soldier as he dresses in rubber boots and is belted. Similes such as "tense as two parachutists also show the military influence and he shows his imagination of being in the army as he "dropped down". In the second stanza they are down on their bellies with "ravenous eyes". He really wants to shoot something. Heaney shows how the foxes were "loping under ferns....flashing brown orbits". The sky is starting to brighten. "Cock sounding reveille" again shows the military imagery. The lines become shorter and emphasise the action. Then comes the shooting. The drama is added to by dialogue. They are doing it for fun and this is emphasised as they call the fox a "playboy". Donnelly sings as he shoots, "Wild Rover no more", which also shows their insensitivity towards the creature. He "Empties two barrels" to make sure the fox is dead. The two boys simply don't care. They aren't interested in catching anymore as the shot scares away any other animals. They "dander off" and at their age they are very insensitive towards the fox. It wasn't worth cutting out the tongue. There is no sentiment shown. It is a clear fact that the money is no issue. The whole point of killing the animal was simply for pleasure. This ending is significant and it shows that Heaney has again matured to another level. ...read more.