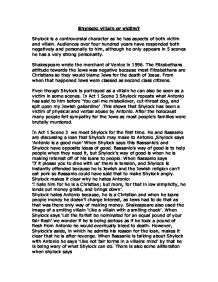 Shylock: villain or victim? Shylock is a controversial character as he has aspects of both victim and villain. Audiences over four hundred years have responded both negatively and personally to him, although he only appears in 5 scenes he has a very strong personality. Shakespeare wrote the merchant of Venice in 1596. The Elizabethans attitude towards the Jews was negative because most Elizabethans are Christians so they would blame Jews for the death of Jesus. From when that happened Jews were classed as second class citizens. Even though Shylock is portrayed as a villain he can also be seen as a victim in some scenes. In Act 1 Scene 3 Shylock repeats what Antonio has said to him before 'You call me misbeliever, cut-throat dog, and spit upon my Jewish gabardine' .This shows that Shylock has been a victim of physical and verbal abuse by Antonio. After the holocaust many people felt sympathy for the Jews as most people's families were brutally murdered. In Act 1 Scene 3 we meet Shylock for the first time. He and Bassanio are discussing a loan that Shylock may make to Antonio ,Shylock says 'Antonio is a good man' When Shylock says this Bassanio's and Shylock have opposite ideas of good. ...read more.

In act 2 scene 2 Shylock tells Jessica to look after the house while he dines with Bassanio, he says 'Jessica my girl, look to my house. I am right loathe to go; there is some ill a-brewing towards my rest, for I did dream of money bags tonight'. What Shylock is saying is that he is going to dinner with Bassanio reluctantly. Jessica doesn't really like living with Shylock as she says 'Our house is hell'. This makes the audience feel sympathy for Shylock as his own daughter doesn't like living with him, also there is a use of alliteration which emphasizes her unhappiness at living in their house. Most people would feel sympathy, but an Elizabethan audience wouldn't, in fact they would find it amusing for Shylock when his daughter runs away with Lorenzo (the Christian). However even after his daughter has just ran away with a Christian, it appears that he is more worried about his ducats. If Shylock got his daughter back then I think that he would ask for the money back first as he is more concerned about his money than his daughter. In Act 3 Scene 1 Shylock shocks the audience through his language, it appears he is more concerned about losing his money 'Thou stickest a dagger in me: I shall never see my gold again: fourscore ducats at a sitting! ...read more.

plots to kill a venetian (Antonio), then the punishment is that the foreigners wealth should be confiscated and they would also force him to change his religion to Christianity. At the end of the scene Shylock appears to be a broken man. Shylock has been a strong presence in the play, even though he only appears in 5 scenes. To an Elizabethan audience, he would have been seen as a villain. Since the holocaust however, there has been more sympathy for the Jews, and audiences have responded differently to Shylock. Shylock, throughout the play, appears to be cold and ruthless but in some ways this is understandable as he has to stand his ground else Antonio won't take him seriously about the bond until the trial scene where he was a broken man. In that scene Shylock is the saddest man you will ever see because he sharpens his knife to cut Antonio as agreed in the bond but someone says if he cuts a Christian (Antonio) then he will lose all of his money and land, so he breaks down because he wouldn't have done it he just wanted to look like he could go through with it. By Brandon Mclaren ...read more.