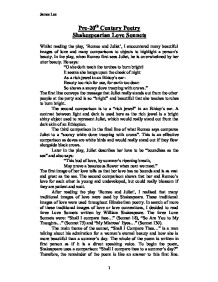 Pre-20th Century Poetry Shakespearian Love Sonnets Whilst reading the play, 'Romeo and Juliet', I encountered many beautiful images of love and many comparisons to objects to highlight a person's beauty. In the play, when Romeo first sees Juliet, he is overwhelmed by her utter beauty. He says: "O she doth teach the torches to burn bright! It seems she hangs upon the cheek of night As a rich jewel in an Ethiop's ear- Beauty too rich for use, for earth too dear: So shows a snowy dove trooping with crows." The first line conveys the message that Juliet really stands out from the other people at the party and is so "bright" and beautiful that she teaches torches to burn bright. The second comparison is to a "rich jewel" in an Ethiop's ear. A contrast between light and dark is used here as the rich jewel is a bright shiny object used to represent Juliet, which would really stand out from the dark skin of an Ethiopian. The third comparison in the final line of what Romeo says compares Juliet to a "snowy white dove trooping with crows". This is an effective comparison as doves are white birds and would really stand out if they flew alongside black crows. Later in the play, Juliet describes her love to be "boundless as the sea" and also says: "This bud of love, by summer's ripening breath, May prove a beauteous flower when next we meet." ...read more.

The next four lines describe his worry that someone could steal his partner from him. In the subsequent two lines, he thinks that the solution to his problem would be to isolate her from the rest of the world so that other people would not see her. After this, he explains that because he has to hide her away from other people, sometimes he 'feasts' on her sight, but can also be starved for a look at her during other times, which gives him no pleasure or happiness at all. Although, the small glimpses that he 'takes' from her do give him some delight. In the closing lines, he stated that he either yearns for her or 'gorges' on her and keeps the woman to himself. Within this sonnet, there is a wide use of imagery for the woman that he is in love with and himself. The woman is compared to 'food' and 'showers of rain' as explained earlier in the poem. To continue the theme of food, the woman is later compared to a 'feast'. The man describes himself as an enjoyer of his lover's beauty and compares himself to a 'miser'. The latter is used in conjunction with the comparison of the woman to a 'miser's wealth' or treasure. This is used to show his 'stinginess' of hiding her away like a miser would do with their belongings or money and not share them with anyone. ...read more.

Finally, the last common theme that is prominent throughout the sonnets is that all the comparisons are exaggerated. In the first sonnet, "Shall I Compare Thee..." the woman is compared to a "summer's day" and this theme is developed in the poem. In the second sonnet, "So Are You to My Thoughts..." the woman is compared mainly to food and wealth. Whereas the last sonnet, "My Mistress' Eyes..." the woman is compared to a vast amount of things like the Sun and coral. I like the poem, "My Mistress' Eyes" because of the mocking tone that was a result of Shakespeare making-fun of the love conventions used throughout Elizabethan poetry. Also, I enjoyed reading this poem because it contrasted greatly with the other two sonnets as it did not describe the woman to be 'perfect', but realistic. Whereas, I liked the imagery used in, "Shall I Compare Thee..." because a summer's day is a very beautiful image and to compare a woman to this really shows her true beauty. Likewise, I appreciated the sentiment expressed in, "So Are You to My Thoughts..." because the main theme is stating that a woman is so precious and vital that to function without her would be absolutely impossible. Yet overall, I prefer the poem, "Shall I Compare Thee..." for several reasons. Firstly, I really liked the imagery used; secondly, I thought the image of a "summer's day" was very beautiful and thirdly, I liked the way that Shakespeare conveyed the message cpnvincingly, that the woman's beauty is greater than a summer's day and will never fade or deteriorate. James Lee 1 ...read more.