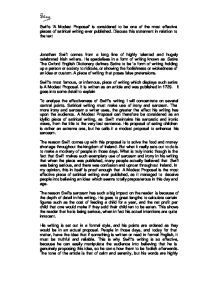 Swifts 'A Modest Proposal' is considered to be one of the most effective pieces of satirical writing ever published. Discuss this statement in relation to the text.

Swifts 'A Modest Proposal' is considered to be one of the most effective pieces of satirical writing ever published. Discuss this statement in relation to the text Jonathan Swift comes from a long line of highly talented and hugely celebrated Irish writers. He specialises in a form of writing known as Satire. The Oxford English Dictionary defines Satire to be 'a form of writing holding up a person or society to ridicule, or showing the foolishness or wickedness of an idea or custom. A piece of writing that poses false pretensions. Swift's most famous, or infamous, piece of writing which displays such satire is A Modest Proposal. It is written as an article and was published in 1729. It goes into some detail to explain To analyse the effectiveness of Swift's writing I will concentrate on several central points. Satirical writing must make use of irony and sarcasm. The more irony and sarcasm a writer uses, the greater the effect his writing has upon the audience. ...read more.

His writing is set out in a formal style, and his points are ordered as they would be in an actual proposal. People in those days, and today for that matter, have the idea that if something is written or read in formal English, it must be truthful and reliable. This is why Swift's writing is so effective, because he can easily manipulate the audience into believing that he is genuinely proposing this idea, so he can show them to be foolish afterwards. The tone of the article is that of calm and serenity, but his words are highly disturbing, giving the reader a sense of sadness, and perhaps reluctance to reveal his thoughts. A Modest Proposal is an allegorical masterpiece, showing many different aspects of human nature at the same time. It reveals the atrocities taking place throughout the entire kingdom at the time. The poverty, harshness, and some of the things people would do to end their suffering, and prevent their children from going through what they went through. ...read more.

Some may argue that this is why he is proposing that we turn to eating children, because it is ensuring that his own children are safe from harm, showing how uncompassionate he is for others. In effect, what Swift has accomplished is figurative piece of writing which works on multiple levels. On the one hand it condemns the English for being so aggressive and the Irish for being so passive, and at the same time it is accusing the narrator for being morally unjust and uncompassionate towards other human beings, and also the reader for accepting all the intolerable situations around us just because we don't come into contact with any of them, such as poverty and fascism. In my opinion, this is what makes A Modest Proposal such a great piece of satirical writing. Swift has successfully used many forms of sarcasm and irony, be they metaphorical or literal, to expose the idiocy and naivety of an entire nations worth of people. This is what makes it one of the most effective pieces of satirical writing to ever entertain the masses. ...read more.