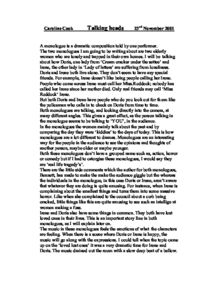 Talking Heads monologue - I will be talking about how Doris, one lady from 'Cream cracker under the settee' and Irene, the other lady in 'Lady of letters' are suffering from loneliness.

Caroline Cook Talking heads 23rd November 2001 A monologue is a dramatic composition told by one performer. The two monologues I am going to be writing about are two elderly women who are lonely and trapped in their own homes. I will be talking about how Doris, one lady from 'Cream cracker under the settee' and Irene, the other lady in 'Lady of letters' are suffering from loneliness. Doris and Irene both live alone. They don't seem to have any special friends. For example, Irene doesn't like being people calling her Irene. People who come across Irene must call her Miss.Ruddock; nobody has called her Irene since her mother died. Only real friends may call 'Miss Ruddock' Irene. But both Doris and Irene have people who do you look out for them like the policeman who calls in to check on Doris from time to time. Both monologues are talking, and looking directly into the camera, at many different angles. This gives a great effect, as the person talking in the monologue seems to be talking to 'YOU', in the audience. In the monologues the women mainly talk about the past and by comparing the day they were 'kiddies' to the days of today. This is how monologues are a lot different to dramas. Monologues are an interesting way for the people in the audience to see the opinions and thoughts of another person, maybe older or maybe younger. ...read more.

When the priest came round to talk to Miss Ruddock, Irene just cut him short and told him she was an atheist because she doesn't trust anybody. Irene always has to be right, nobody but Irene is good people as far as Irene is concerned. Irene's hobbies of writing letters are a cause of her isolation and nobody understands this. Irene's mother is the cause of her isolation and loneliness. This is obvious by the way Irene speaks very highly of her mother and speaks very lowly of others. Irene's face is very sweet and content when she talks about her mother. I don't think Irene is quite aware of her own isolation but that soon changes towards the end of the monologue. Irene can be very judgemental at times, which can turn the audience against her. But the audience can't but feel sorry for her when she starts getting emotional. Such as when Irene was being nosey about her next-door neighbours, she realised that she wasn't seeing much of the kiddie and so Irene jumped to the conclusion that the parents had abandoned the child. She didn't think of the consequences of this allegation. Irene wrote another letter to the neighbours about her feelings for tem, which weren't nice. However the audience didn't know that Irene had written a letter at this precise moment. The audience only found out when the police had to be forced to Irenes house and confronted Irene. ...read more.

Doris is very emotional. Her past plays a massive part of her life. Doris only really thinks about the past. She does talk about the days of today but only comparing them to the days of her past. The only way out of loneliness for Doris is if she goes to Stafford house but she doesn't want to. Doris has no self-knowledge. She might if she acquainted Stafford house. Doris is very muddled up with her old age, she doesn't know what she wants or what she's going to do. Both monologues: In 'Cream Cracker under the Settee' my emotions stayed practically the same all the way through the monologue, as for 'Lady of Letter' I felt a number of emotions for Irene, Happy, angry, sad. I felt a lot of sympathy for Doris when she was talking about her family but i feel no sympathy for Irene. As I said, my feelings stayed the same for Doris but I did feel frustrated at times, as it is frustrating when 'you' know what's best for someone but that someone doesn't understand. My feelings varied a huge amount for Irene mainly because Irene's feelings varied an amount. Both monologue were encouraging in there own ways. 'Cream cracker under the settee' did get a bit tedious at times and sometimes made me want to fall asleep due to the same tone of voice droning on and on. I had a lot more to write about for Lady of Letters because I thought there was a much better story line. ...read more.