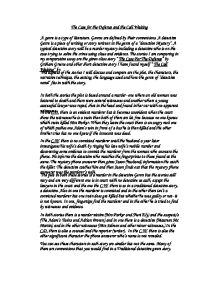 The Case for the Defence and the Call Waiting.

The Case for the Defence and the Call Waiting A genre is a type of literature. Genres are defined by their conventions. A detective Genre is a piece of writing or story written in the genre of a "detective Mystery". A typical detective story will be a murder mystery including a detective who is on the case trying to solve the crime using clues and evidence. The stories I am comparing in my comparative essay are the given class story " The Case For The Defence" by Graham Greene and other short detective story I have found myself " The Call Waiting" by The aspects of the stories I will discuss and compare are the plot, the characters, the narrative technique, the setting, the language used and how the genre of 'detective novel' fits in with the story. In both the stories the plot is based around a murder- one where an old woman was battered to death and there were several witnesses and another where a young successful lawyer was raped, shot in the head and found in her car with no apparent witnesses. In the C.D. there is an evident murderer but it becomes unevident when the court show the witnesses he is a twin then both of them are let free because no one knows which twin killed Mrs Parker. ...read more.

This is because the author isn't a character in the case. 'Jason re-chased down every lead' shows it is in 3RD person. 'He did the law for Sheri Ely' proves it is quite normal and not all factual. It also shows Jason doesn't like the Law because he thinks it killed Sheri. The narrative technique is different because one writer is writing and using that to convince the reader that the Adams twins were guilty as he is there but the other writer isn't a character and is just there to tell the story but unlike the other story he tells it in a very unbiased way - just telling it as it is. It is strange how the narrative technique is very different yet these stories are very similar and they still have the same Genre because the conventions are the same but flexible to change. The setting of each story varies one is set in England and the other in the U.S.A. The C.D. is in England in Peckham, London which is a real place-the story gives a lot of detail about the area the main part of the story is when the trial is on in court. ...read more.

In the C.D. there isn't an official detective there are just lawyers who have a similar role in the story to a detective in C.W. Therefore it is evident that the C.W. fits more into the Genre of 'detective novel' The C.D. isn't like a traditional detective story because it is actually in court and there is not a Detective trying to find clues to the murder outside court. To conclude my comparative essay I will sum up the essay. Out of the two books I enjoyed most the Case for the Defence because it was more interesting and had a twist with a dramatic end with the twin being found out then one of them dying. I also feel that the Call Waiting was good but in a different way because it was so mysterious and it left you guessing as well. I was also good the way it was written so you guess the mysterious phone caller was the murderer's wife. I think the author's used the conventions of the genre well to display it was a detective story because they both have the conventions of a detective story yet they are used differently so they are totally different stories. The authors have used the conventions with effect as this is how they appear to have the same conventions as a detective story would but still they are different. ...read more.