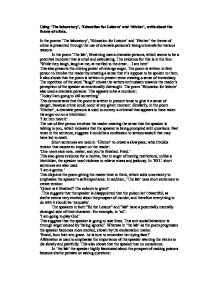 the laboratory, hitcher and education for leisure presents the theme of crime

Using 'The laboratory', 'Education for Leisure' and 'hitcher', write about the theme of crime. In the poems 'The laboratory', 'Education for Leisure' and 'Hitcher' the theme of crime is presented through the use of dramatic persona's being criminals for various reasons. In the poem 'The lab', Browning uses a dramatic persona, which seems to be a potential murderer that is cruel and calculating. The evidence for this is in the line: 'While they laugh, laugh at me, at me fled to the drear... I am here' This also presents the driving power of revenge anger. The poem is written in first person to involve the reader by creating a sense that it's suppose to be spoken to them. ...read more.

Past tense in the sentence, suggests it could be a confession to serious assault that may have led to death. Short sentences are used in 'Hitcher' to create a slow pace, which builds tension that causes an impact on the reader: 'One more sick-note, mister, and you're finished. Fired.' This also gives evidence for a motive, that in anger of having restrictions, unlike a hitchhiker, the speaker used violence to relieve stress and jealousy. In 'EFL' short sentences are also used: 'I am a genius.' This disjoints the poem giving the reader time to think, which adds uncertainty to emphasise the speaker's self-importance. In addition, 'The lab' uses short sentences to create tension: 'Quick-is it finished? ...read more.

This also shows that the speaker has no conscience. In 'the lab' the speaker highly fascinated about the prospect of making poisons because she/he persists on asking questions: 'you call it a gum?... And yonder soft phial, the exquisite blue, sure to taste sweetly, -is that poison too?' The use of positive adjectives inform the reader that she/he is relating the deadly fermentation as beautiful, harmless colours which shows that she/he is truly mad. The rhetorical questions catch the reader's imagination and give them a feeling of evolvement. In conclusion I think the poems are successful in conveying to the reader the feeling of resentment and envy, which lead to crimes such as murder. They all have different motives for the crimes but it is not known that all the speakers are successful in carrying out their potential murder. ...read more.