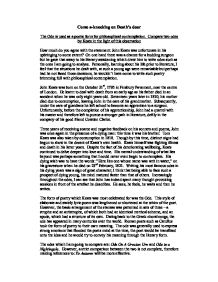 The Ode is used as a poetic form for philosophical contemplation. Compare two odes by Keats in the light of this observation

Come a-knocking on Death's door The Ode is used as a poetic form for philosophical contemplation. Compare two odes by Keats in the light of this observation How much do you agree with the statement: John Keats was unfortunate in his upbringing to some extent? On one hand there was a chance for a budding surgeon but he gave that away to his literary awakening which drew him to write odes such as the ones I am going to analyse. Personally, learning about his life prior to literature, I feel that the situations he dealt with, at such a young age were remarkable but perhaps had he not faced those decisions, he wouldn't have come to write such poetry brimming full with philosophical contemplation. John Keats was born on the October 31st, 1795 in Finsbury Pavement, near the centre of London. He learnt to deal with death from an early age as his father died in an accident when he was only eight years old. Seventeen years later in 1810, his mother died due to consumption, leaving John in the care of his grandmother. Subsequently, under the care of guardians he left school to become an apprentice to a surgeon. Unfortunately, before the completion of his apprenticeship, John had a quarrel with his master and therefore left to pursue a stronger path in literature, deftly in the company of his good friend Cowden Clarke. Three years of receiving scarce and negative feedback on his sonnets and poems, John was once again in the presence of a dying man: this time it was his brother. Tom Keats was also taken by consumption in 1818. Though by this time, distinct signs had begun to show in the decent of Keats's own health. Keats himself was fighting illness and death in his latter years. Despite the fact of his deteriorating wellbeing, Keats continued to delve deeper into love and time. ...read more.

If Keats were to die he would have 'ears in vain' as he could no longer hear the tune of the nightingale, as it would never cease to sing. The seventh stanza, shows the speaker telling the nightingale that it is immortal and that it wasn't 'born for death'. Keats describes the continuous flight of the bird way from him in stanza eight, as he can no longer hear the soft melodious tune. He can no longer recall the sweet music and deliberates whether it was 'a vision, or a waking dream'. He mentions the 'swallow' that recall the nightingale in his other ode: To Autumn. This shows that he has not forgotten what he previously saw, but he remembers what had aroused such great anticipation and emotion. The tail of Ode on a Grecian Urn - the fourth stanza - illustrates another scene on the urn, this one being a group of villagers leading a heifer to be sacrificed. 'To what green altar, O mysterious priest...' depicts that Keats is in a wondrous state, as he wishes to know where they are going and where they have come from. He thinks that the little town will be 'for evermore' silent, since the citizens on the urn will never be able to return as they are frozen onto it. In the final stanza, the speaker - likely to be Keats himself - addresses the urn itself by making comparisons to Eternity, as they both 'tease us out of thought'. He ponders over the thought that when his generation has been long gone, the urn will continue to reside to tell the future children its enigmatic message: 'Beauty is truth, truth beauty'. The only thing for the urn to do is to continue to hold that moral in between its earthy clay. The form of Ode to a Nightingale is no different to most other odes, as it is written in ten-line stanzas. ...read more.

As the artist and poet, Keats found a purpose in life and he mused over what was to be and what had happened. Consequently, I have compared both the odes with a rough link to the third ode To Autumn. Now, to decide which one I have perhaps liked or enjoyed the most. This would be very difficult as both similar though they were, attacked different aspects of freedom and death. Therefore, the one that creates the most intense and passionate picture in mind is the one I can most empathise towards and so it would be the one I prefer. Having defined the concept of "favourite" ode, I can say that Ode on a Grecian Urn sparked the boldest emotions in my mind when I read through it. I felt as if were on the urn itself, I was the maiden stuck in time. I reason that I could feel what Keats felt. One may argue that I am only young and have lived a care free life up to now, however, I think I am still able empathise with Keats, understand his mental anguish as he wished to escape and was prepared to go knocking on Death's door just to become as free as the citizens on the urn. His descriptive and powerful language is perhaps enough to captivate anyone into thinking like him. I may not have experienced life to the full, but then again, Keats didn't either. He died at a very young age and people at the time didn't really have a life expectancy longer than forty years. Being fifteen at this moment in time, I can sometimes contemplate that death is inevitable and facing it could be the better option, than hiding from it. Yes, indeed, youth is a time to enjoy oneself, but only the urn is saved from the wrath of time. Soon it will be Death coming to knock on our doors, or could it be the other way round? ?? ?? ?? ?? ...read more.