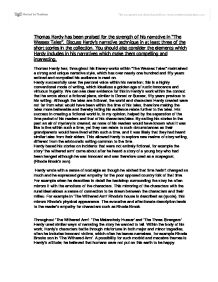 Thomas Hardy has been praised for the strength of his narrative in The Wessex Tales. Discuss Hardy(TM)s narrative technique in at least three of the short stories in the collection. You should also consider the elements

Thomas Hardy has been praised for the strength of his narrative in "The Wessex Tales". Discuss Hardy's narrative technique in at least three of the short stories in the collection. You should also consider the elements which Hardy includes in his narratives which make them compelling and interesting. Thomas Hardy has, throughout his literary works within "The Wessex Tales" maintained a strong and unique narrative style, which has over nearly one hundred and fifty years enticed and compelled his audience to read on. Hardy successfully uses the pastoral voice within his narration; this is a highly conventional mode of writing, which idealizes a golden age of rustic innocence and virtuous frugality. We can see clear evidence for this in Hardy's work within the context that he wrote about a fictional place, similar to Dorset or Sussex, fifty years previous to his writing. Although the tales are fictional, the world and characters Hardy created were not far from what would have been within the time of his tales, therefore making the tales more believable and thereby letting his audience relate further to the tales. His success in creating a fictional world is, in my opinion, helped by the separation of the time period of his readers and that of his characters/tales. By setting his stories in the past an air of mystery is created, as none of his readers would have known what it was like to live within such a time, yet they can relate to such circumstances as their grandparents would have lived within such a time, and it was likely that they had heard similar tales from their elders. ...read more.

It is likely that this character was both. Hardy also wrote about his "Wessex" as being a 'small town' in the sense that it was a close knit community and that everyone knew everything about each other. Although this may seem negative as Hardy tended to express this fact through the form of gossip, it is possible that he still felt affection towards it as it reflected the innocence of the time. Gossip also adds a different perspective to what is going on and therefore making the readers more involved in the story. For example in 'The Melancholy Hussar' Hardy uses the narrative text to prolong the idea of gossip making the readers feel more involved in the scandal and anxious to find out what happens next. The narrative also allowed Hardy to give a personal take on the tale, bearing in mind that the narrator was also interpreting the tale, making the story sound more believable.I think the reason Hardy seemed to hold such affection for gossip is because it seems that as time went on interest in peoples neighbors welfare/relations decreased, possibly showing that people had stopped caring or became more self absorbed. In the three strangers, Hardy introduces us to the tale by describing in great detail the agricultural surroundings of his setting, "Among the few features of agricultural England which retain an appearance" the significance behind this in connection with Hardy's nostalgia could be due to the fact that as the years grew on less and less of the countryside remained undisturbed as it gradually gave ...read more.

Hardy also explores the concept of fate and destiny within his stories, and how people's destiny's can be interwoven and connected. For example, how the sheep stealer and the hangman both came turned up at the isolated house in 'The Three Strangers'. A possible reason for this is Hardy himself nearly died as a child and from an early age had a fascination with death. Another possibility for why Hardy explored such subjects was that of the audience he was aiming to appeal to; the Victorians. Death was a thrilling but dangerous subject during the Victorian era, and therefore Hardy's work enticed readers. It seems Hardy also linked in with his fate and death theme the idea of the supernatural. At the time this was viewed by many as a social taboo and that touching on pre-Christian superstitions was immoral. However Hardy successfully managed to maintain this theme without offending to many people, but instead exciting and enticing them with these taboo mysterious phenomena. For example, in 'The Withered Arm' Conjurer Trendle and Rhoda's dream touches on a prospect that is both frightening and enticing, in that the supernatural can affect you without anybody's consent. I believe Hardy's narrative style is most successful due to his skill in being able to touch on social taboos but instead of offending with them, using them as a way to entice and compel readers to read on. Also the way he manages to involve his audience so deeply into the tales, so that he does not just create empathy for the characters but can make his readers jump of their seats in shock when something exciting happens. ...read more.