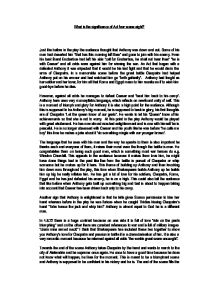 What is the significance of Act four scene eight?

What is the significance of Act four scene eight? Just like before in the play the audience thought that Anthony was down and out. Some of his men had deserted him "that has this morning left thee" and gone to join with his enemy. Even his best friend Enobarbus had left his side "call for Enobarbus, he shall not hear thee" "he is with Caesar" and all odds were against him for winning the war. An Act that began with a defeated Anthony it was expected that it would be his last fight and that he would die in the arms of Cleopatra. In a memorable scene before the great battle Cleopatra had helped Anthony put on his armour and had watched him go "forth gallantly". Anthony had fought as her soldier and her lover, for him all that Rome and Egypt mean to him reunite as if to wish him good-bye before he dies. ...read more.

He congratulates them on being such good men, which is something most war heroes do e.g. Winston Churchill. This appeals to the audience because it makes them love him, he might have done things bad in the past like flee from the battle in pursuit of Cleopatra or whip someone but he makes up for it here. This theme of building up Anthony and then knocking him down runs throughout the play, this time when Shakespeare builds Anthony up he builds him up big he really inflates him. He has got a lot of love for his soldiers, Cleopatra, Rome, Egypt and he has just defeated his enemy, he is on a high. This could also tell the audience that like before when Anthony gets built up something big and bad is about to happen taking into account that Caesar has been driven back only to his camp. Another sign that Anthony is enlightened is that he tells gives Scarus permission to kiss her hand whereas before in the play he was furious when he caught Thidias kissing Cleopatra's hand "Take hence the jack and whip him!" ...read more.

This is meant to be a triumphant scene and Anthony is supposed to be confident in his victory and he is. The end of the scene fills the stage with colour, music and excitement as Anthony takes Cleopatra's hand and they lead Scarus and the other soldiers off to a victory march. In conclusion this scene is significant because it shows Anthony at his best to the audience. Anthony is a new man and is sort of enlightened finally for the first time in the play everything is going right. The audience love him and are pleased that things are going well. I think that part of this is due to the tragic death of Enobarbus who die of a broken heart as Anthony is the last word that he speaks. Everyone in the audience knows, even before coming to the play, that Octavius Caesar will eventually become Augustus Caesar, the sole ruler on the empire. Is the audience left to believe that and think of Anthony as noble, chivalrous leader? ...read more.