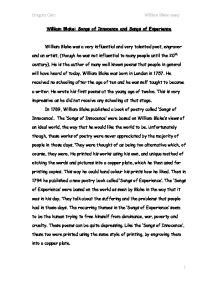 William Blake: Songs of Innocence and Songs of Experience.

William Blake: Songs of Innocence and Songs of Experience William Blake was a very influential and very talented poet, engraver and an artist, (though he was not influential to many people until the 20th century). He is the author of many well known poems that people in general will have heard of today. William Blake was born in London in 1757. He received no schooling after the age of ten and he was self taught to become a writer. He wrote his first poems at the young age of twelve. This is very impressive as he did not receive any schooling at that stage. In 1789, William Blake published a book of poetry called 'Songs of Innocence'. The 'Songs of Innocence' were based on William Blake's views of an ideal world, the way that he would like the world to be. Unfortunately though, these works of poetry were never appreciated by the majority of people in those days. They were thought of as being too alternative which, of course, they were. He printed his works using his own, and unique method of etching the words and pictures into a copper plate, which he then used for printing copies. This way he could hand colour his prints how he liked. Then in 1794 he published a new poetry book called 'Songs of Experience'. The 'Songs of Experience' were based on the world as seen by Blake in the way that it was in his day. They talk about the suffering and the problems that people had in those days. The recurring themes in the 'Songs of Experience' seem to be the human trying to free himself from dominance, war, poverty and cruelty. These poems can be quite depressing. Like the 'Songs of Innocence', these too were printed using the same style of printing, by engraving them into a copper plate. Blake was anti-authorities, e.g. ...read more.

I a child and thou a lamb, We are called by his name. Little Lamb God bless thee. Little Lamb God bless thee. As you can see the poem is in two ten line stanzas, each with a regular pattern of syllables, six in the first and last two lines in each stanza and seven in the other lines. Also every couplet of lines rhymes in their last word except in the second stanza where 'lamb' and 'name' only rhyme very weakly. Another tactic that William Blake has used in this poem is repetition. He has repeated the first two and the last two lines in the second stanza. And in the first stanza, the first two lines and the last two lines are very similar, changing only a word or two in each. By using repetition it makes the poem seem more like it has been written by a child. One of the lines in this poem was in a way stolen from another. A book called Wesley's Hymns for children has a poem in it called 'Gentle Jesus, meek and mild'. This is very similar to the line in 'The Lamb' where it says 'He is meek and he is mild'. Anyone that had been to Sunday school would know of this poem which suggests that the child author of this poem did in-fact go to Sunday school. I think that this poem expresses Blake's view on how children are innocent. The language that the child uses, the subject about which the child is speaking, and the style of language that the child uses (how sweetly and gently he talks to the lamb) all represent the innocence of the child. And because Blake is showing these in his poems it outlines his thoughts that children are born without sin and are born innocent, and that children are innocent. It also shows more of Blake's views on religion. ...read more.

In a way this shows how people in those days believed that children were born full of sin. That they were little evil devils, that needed to be disciplined to make them good. Blake of course did not believe this. He believed that children were born totally innocent and that they became sinful on their journey through life. The next stanza talks about how the baby struggles in his father's hands as he holds it, and of how the baby has been bound, and of how it is struggling to break free of these bonds but is too tired or 'weary' as the poem puts it to do so. To finish off the poem, Blake says that the baby thought that all it could do was to sulk upon its mother's breast. This seems rather sad that a brand new baby is feeling depressed and upset within the first few days of its life. This is what Blake did not believe in he believed that children should be loved and cherished from birth. I find this poem quite upsetting, that such a young child could possibly get so upset so soon in its life. I find it interesting that Blake wrote two poems that are so similar yet so different, 'Infant Joy', and 'Infant Sorrow'. Both are very good poems and are very effective. Although I think that 'Infant Joy' is obviously a much nicer poem to read because it is happy, 'Infant Sorrow' is the better poem for conveying the message that Blake hides inside his poems. All in all, I have learnt to like Blake's works very much. Now that I understand his perspectives his poems seem to make sense to me, and his ideal world is much the same as mine would be. Also I do like his art work, his unique style of printing is fantastic, and gives good results. So I find that William Blake was way ahead of his time, as today many of his ideas are in practice, and many people are thinking more like him. By Gregory Cain Gregory Cain William Blake essay 1 ...read more.