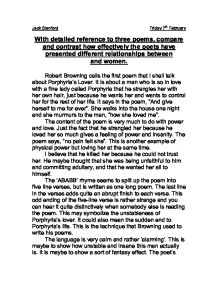 With detailed reference to three poems, compare and contrast how effectively the poets have presented different relationships between and women.

Jack Stanford Friday 7th February With detailed reference to three poems, compare and contrast how effectively the poets have presented different relationships between and women. Robert Browning calls the first poem that I shall talk about Porphyria's Lover. It is about a man who is so in love with a fine lady called Porphyria that he strangles her with her own hair, just because he wants her and wants to control her for the rest of her life. It says in the poem, "And give herself to me for ever". She walks into the house one night and she murmurs to the man, "how she loved me". The content of the poem is very much to do with power and love. Just the fact that he strangled her because he loved her so much gives a feeling of power and insanity. The poem says, "no pain felt she". This is another example of physical power but loving her at the same time. I believe that he killed her because he could not trust her. He maybe thought that she was being unfaithful to him and committing adultery, and that he wanted her all to himself. The 'ABABB' rhyme seems to split up the poem into five line verses, but is written as one long poem. ...read more.

The poem was written in the nineteenth century and this is what the relationships were like between men and women. They were thought upon as objects. The next poem features a cunning manipulator who is an important duke and has his previous 'Duchess' painted as a picture and hung on the wall of his home. This is so he could keep her as an object forever! Robert Browning also wrote this poem and it is called 'My Last Duchess'. The duke is an educated, sophisticated man with a plausible tone. He is persuasive but also laid back. The duchess appears not to appreciate the duke's superiority. The tones in the poem are very much like the tones in Porphyria's Lover. The plausible tone is power. The writer describes the duchess in the middle of the poem as a bit 'disloyal'. She is described as "too easily impressed" and said to "like whatever she looked on". Another good quotation is "her looks went everywhere". She was accused by the duke of looking at people in the same way that she looked at him, "she thanked men, good: but thanked somehow... I know not how... ". The duke interprets that she is being disloyal! The duke however did not tolerate this kind of behaviour and had her killed, "then all smiles stopped together"! ...read more.

This poetic device gives a soft, delicate sound in the language. These words are also monosyllabic which also gives a soft delicate effect. The poem seems to be divided up into two sections. It is divided up into a section of the past and then a section of the present. The present seems to be bleak and empty and this represents no future, "the short days shorten" and " the low grey sky". This break happens after the third stanza. The bride seems to be very naive and vulnerable. The poem is written by a women and this poet might be trying to give a message to the readers about how women used to be treated. This tone is very strong throughout the poem I do not believe that the tone is about power in this poem. Near the end of the poem, it says, "she sleeps up in the attic there, alone poor maid". This line of the poem is evidence that he still has feelings for her and that he feels sorry for her and wants her to be free. It is not about power, it is just about love. The love of a farmer and his bride. The ending is very short but features very soft, quiet words and brings the poem to a calm finish. ...read more.