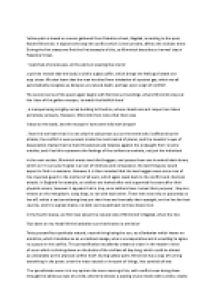 Yellow Palm Analysis. Yellow palm is based on scenes gathered from Palestine street, Bagdad, according to the poet, Robert Minninick

﻿Yellow palm is based on scenes gathered from Palestine street, Bagdad, according to the poet, Robert Minninick. It explores the way the conflict which is ever present, affects the civilians there. During the first stanza we find the first example of this, as Minninick describes a ?normal? day in Palestine Street, ?I watched a funeral pass, all the women wearing lilac stems? ,but then reveals that the body is within a glass coffin, which brings the feeling of death one step closer. We also learn that the man has died from inhalation of a poison gas, which we all automatically recognize as being an un-natural death, perhaps even a sign of conflict! The second verse of the poem again begins with Normal surroundings, where Minninick stops at the ?door of the golden mosque, to watch the faithful there? , a mosque being a highly sacred building to Muslims, where cleanliness and respect are taken extremely seriously. However, Minninick then notes that there was ?blood on the walls, and the muezzin?s eyes were wild with despair? , from this we learn that it is not only the odd person out on the street who is affected by the attacks, the conflict is even present inside the most sacred of places, and the muezzin?s eyes of ...read more.

The penultimate verse is in my opinion the more moving of six, with conflict even being show through the oblivious eyes of a child, where he blesses a soaring cruise missile with a smile, clearly unaware of its deadly intent. Minninick choses to inform us that this is a beggar child, which leads us to imagine that perhaps a form of conflict has facilitated this? Finally, we discover where Minninick got the title ?yellow palm?, it refers to the trees which bear yellow dates, which when falling could link to the falling civilians and soldiers who are dying all around because of the conflict. The very first line of ?Out of the blue? sets the whole nature of the poem, the line ?you have picked me out? is very directly aimed at the reader and is understated considering the scale of the disaster in which both the subject and Simon armitage find themselves in. ?through a distance shot of a building burning, you have noticed me now? the adjective ?burning? brings a sense of reality and immediacy to the poem, which is backed up further with the 1st person narration. The final line of the stanza ?a white cotton shirt is twirling, turning? begins to form a sequence of adjectives ending each stanza, which as mentioned before creates a real sense of reality. ...read more.

The two above poems can relate to each other in several ways, one similarity for example is the way conflict is show through the eyes of not just one, but multiple parties. Both poems are based around attacks, and in both situations, terrorism play a huge role. In ?Yellow palm? we see how conflict affects civilians on Palestine street, from many different angles, including a funeral gathering, a Muezzin, two blind ex servicemen, the natural surroundings and a beggar child. However ?out of the blue? only focuses on one particularly person, a man in the burning north tower, moments, after the 9/11 attacks. ?out of the blue? uses the constant use of adjectives such as twirling, turning, watching, bullying, driving, wind-milling, wheeling, spiralling and eventually, failing, flagging, to describe the desperate situation this man finds himself in, they bring a sense of reality and urgency to the poem and give graphic descriptions of fellow workmen and women are being burnt alive, or how they are falling to their unavoidable death. Alternatively, in ?yellow palm? Minninick uses a far more subdued method of approach, which i personally think is more beneficial to present conflict in an understated yet concise manor. ...read more.