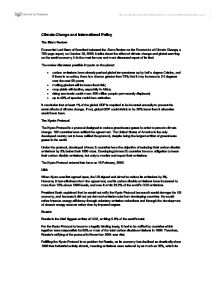 Climate Change and International Policy The Stern Review Economist Lord Stern of Brentford released the Stern Review on the Economics of Climate Change, a 700-page report, on October 30, 2006. It talks about the effect of climate change and global warming on the world economy. It is the most famous and most discussed report of its kind. The review discusses possible impacts on the planet: * carbon emissions have already pushed global temperatures up by half a degree Celsius, and if there is no action, there is a chance greater than 75% that it may increase to 2-3 degrees over the next 50 years; * melting glaciers will increase flood risk; * crop yields will decline, especially in Africa; * rising sea levels could mean 200 million people permanently displaced; * up to 40% of species could face extinction. It concludes that at least 1% of the global GDP is required to be invested annually to prevent the worst effects of climate change. ...read more.

President Bush explained that he would not ratify the Kyoto Protocol because it would damage the US economy, and because it did not yet demand emission-cuts from developing countries. He would rather improve energy-efficiency through voluntary emission-reductions and through the development of cleaner energy sources rather than by imposed targets. Russia Russia is the third biggest emitter of CO2, emitting 5.6% of the world's total. For the Kyoto Protocol to become a legally binding treaty, it had to be ratified by countries which together were responsible for 55% or more of the total carbon dioxide emissions in 1990. Therefore, Russia's ratifying of the protocol in November 2004 was vital. Fulfilling the Kyoto Protocol is no problem for Russia, as its economy has declined so drastically since 1990 that industrial activity shrunk, meaning emissions were reduced by as much as 35%, which far exceeds the demands of the Kyoto Protocol. Russia can make billions of dollars through selling the surplus emissions entitlement to other countries that are emitting more than the protocol allows them to. ...read more.

In fact, the development has been so rapid that the Indian CO2 emissions are estimated to have increased by more than 50% in the 1990s. However, with India's steadily growing demand for energy, soon it must tackle the problem of reducing greenhouse gases. China China is the second biggest emitter of carbon dioxide, emitting 18.4% of the world's total, however the average Chinese citizen consumes only 10-15% of the energy the average US citizen consumes. Recognizing that climate change could have a very large impact on their country, China ratified the Kyoto Protocol in 2002. As with India, China's status as a developing country relieves it of the obligation to reduce its greenhouse gas emissions, however the Chinese government announced plans to generate 10% of its total energy from renewable sources by 2010. China is the world's biggest coal producer, and its oil consumption has doubled in the last 20 years. The country faced power cuts in 2004 as soaring growth outstripped electricity generation. It is unclear whether Beijing would agree to ratify an agreement involving imposed targets. ...read more.