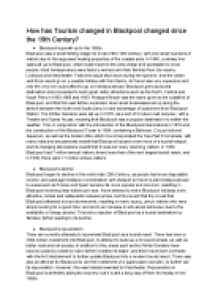 How has Tourism changed in Blackpool since the 19th Century?

Transfer-Encoding: chunked ﻿How has Tourism changed in Blackpool changed since the 19th Century? * Blackpool?s growth up to the 1950s Blackpool was a small fishing village for most of the 19th century, with only small numbers of visitors due to the supposed healing properties of the coastal area. In 1846, a railway line was built up to Blackpool, which made travel to the area cheap and accessible to most people. Most holidaymakers were factory workers and their families from the nearby Liverpool and Manchester. Factories would shut down during the summer, and the whole workforce would go on a coastal holiday with their family. Air travel was very expensive and only the very rich could afford to go on holidays abroad. ...read more.

This, in conjunction with the introduction of the Blackpool Illuminations in 1879 and the construction of the Blackpool Tower in 1894, containing a Ballroom, Circus Hall and Aquarium, as well as the Golden Mile which now incorporated the Sea Wall Promanade, with many rides and amusements meant that Blackpool became even more of a tourist hotspot, and its changing atmosphere meant that it received many returning visitors. in 1930, Blackpool had 7 million annual visitors, three times that of the next largest tourist resort, and in 1950, there were 17 million annual visitors. * Blackpool?s decline Blackpool began to decline in the mid-to-late 20th Century, as people had more disposable income, and package holidays in combination with cheaper air travel made holidays abroad to areas such as France and Spain became far more popular and common, resulting in Blackpool receiving less visitors per year. ...read more.

This led to rejection of Blackpool as a tourist destination by families, further leading to its decline. * Blackpool’s rejuvenation There are currently attempts to rejuvenate Blackpool as a tourist resort. There has been a £300 million investment into Blackpool, to attempt to build up a new promenade, as well as better road and rail access. In addition to this, areas such as the Winter Gardens have become publicly owned to make further investment easier, and there have been contracts with Merlin Entertainment to further update Blackpool into a modern tourist resort. There was also an attempt for Blackpool to win the investment of a supercasino complex, to further aid its rejuvenation. However, this was instead awarded to Manchester. Rejuvenation in Blackpool is definitely aiding its recovery, but it is still a long way off from its heyday in the 1950s. ...read more.