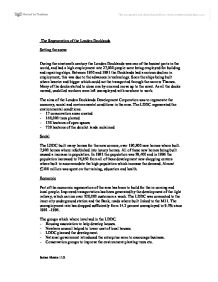 The Regeneration of the London Docklands

The Regeneration of the London Docklands Setting the scene During the nineteenth century the London Docklands was one of the busiest ports in the world, and had a high employment rate 27,000 people were being employed for building and repairing ships. Between 1950 and 1981 the Docklands had a serious decline in employment, this was due to the advances in technology. Soon the ships being built where heavier and bigger which could not be transported through the narrow Thames. Many of the docks started to close one by one and move up to the coast. As all the docks moved, unskilled workers were left unemployed with nowhere to work. The aims of the London Docklands Development Corporation was to regenerate the economy, social and environmental conditions in the area. The LDDC regenerated the environmental conditions: - 17 conservation areas created - 160,000 trees planted - 130 hectares of open spaces - 728 hectares of the derelict lands reclaimed Social The LDDC built many homes for the new comers, over 190,800 new homes where built. 7,900 homes where refurbished into luxury homes. All of these new homes being built caused a increase in population. In 1981 the population was 39,400 and in 1996 the population increased to 76,850 from all of these development new shopping centers where built to accommodate the high population which increase the demand. ...read more.

New houses Business workers Accommodation for new workers, again LDDC persuading business to advance Environment improvements Business/local Both for local and persuading new workers Improved roads Mainly business To improved accessibility to there work place Training education/health Local For local benefits and some business to enjoy leisure facilities I could have improved my project by investigating more about the LDDC. Also targeting a wider range of people. I could have researched in more detail the aims and achievements of the LDDC. I could have produced more graphs showing more information. I could have collect more information from my questionnaires because the more information gathered the better. My own hypothesis I have produce three of my own hypothesis: " Did the LDDC regenerate the Docklands for the local people or incoming workers". This is explained in section four. To what extent has the LDDC improved the life and working conditions for the incoming people" The LDDC has improved the living conditions and work environment by building many homes and improving environmental conditions. The LDDC has also created easier access for the incoming people. "Is the majority of the regenerated homes used by local or incoming people" The majority of the new homes are mainly built for the incoming people who can work in the Docklands and live close by. The new homes are too expensive for the local people to rent or buy. James Aherne 11t2 ...read more.