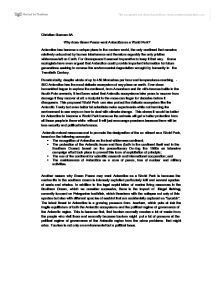 Why does Green Peace want Antarctica as a World Park?

Christian German 8A Why does Green Peace want Antarctica as a World Park? Antarctica has become a unique place in the modern world, the only continent that remains relatively untouched by human interference and therefore arguably the only pristine wilderness left on Earth. For Greenpeace it seemed imperative to keep it that way. Some ecologists have even argued that Antarctica could provide important information for future generations seeking to reverse the environmental degradation wrought by humanity in the Twentieth Century. Paradoxically, despite winds of up to 450 kilometres per hour and temperatures reaching -50C Antarctica has the most delicate ecosystem of any place on earth. ...read more.

This shows it would be better for Antarctica to become a World Park because the animals will get a better protection from all those people in there while without it will just encourage poachers because there will be less security and political interference. Antarctic natural resources and to promote the designation of the continent as a World Park, based on the following concepts: * The recognition of Antarctica as the last wilderness continent; * The protection of the Antarctic fauna and flora (both in the continent itself and in the Southern Ocean) based on the precautionary During the 1980s an intensive campaign effort took place to prevent this form of exploitation of principle; * The use of the continent ...read more.

of illegal fishing, currently focused on Patagonian toothfish, which threatens with the collapse not only of this species but also with different species of seabird that are accidentally captured as "bycatch". The latest threat to Antarctica is a growing pressure from tourism, which puts at risk the fragile equilibrium of both the Antarctic ecosystems and the political regime of governance of the Antarctic region. This is because first, that tourism normally creates a lot of waste from the people who visit there and secondly because tourism might put a lot of pressure at the political regime of governance of the Antarctic region from the crime problems that might arise. Tourism is not only an environmental but a political issue. ...read more.

The candidate addresses the question well. Their focus is displayed well throughout the essay from the various topics they have chosen, and they go into good depth about each point analysing the concept of the question well.

The candidate addresses the question well. Their focus is displayed well throughout the essay from the various topics they have chosen, and they go into good depth about each point analysing the concept of the question well.

The introduction is done very well. It sets out some of the arguments they are set to cover throughout the rest of the essay. They set out a range of different factors as to why the Antarctic is considered a world park. The candidate lacks a conclusion which should have been used to tie up any loose ends and generally bring together their opinion on why green peace wants to use Antarctica as a world park. The candidate does not mention any other possible things that the Antarctic may be good for which would put another depth to the essay.

Punctuation, grammar and spelling all done to a very good standard. The essay flows well and the tone of the essay is spot on