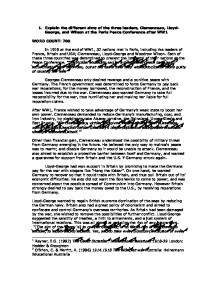 Explain the different aims of the three leaders, Clemenceau, Lloyd-George, and Wilson at the Paris Peace Conference after WW1

1. Explain the different aims of the three leaders, Clemenceau, Lloyd-George, and Wilson at the Paris Peace Conference after WW1 WORD COUNT: 700 In 1919 at the end of WW1, 32 nations met in Paris, including the leaders of France, Britain and USA; Clemenceau, Lloyd-George and Woodrow Wilson. Each of these three countries was determined to present the interests' of their nations at the Peace Conference. "The victors wished to secure a permanent peace based on reconciliation with their foes, but at the same time they wished to punish those guilty of causing the war."1 Georges Clemenceau only desired revenge and a punitive peace with Germany. The French government was determined to force Germany to pay back war reparations; for the money borrowed, the reconstruction of France, and the losses incurred due to the war. Clemenceau also wanted Germany to take full responsibility for the war, thus humiliating her and making her liable for full reparation claims. After WW1, France wished to take advantage of Germany's weak state to boost her own power. Clemenceau demanded to reduce Germany's manufacturing, coal, and iron industry, by pledging to take Alsace-Lorraine, the Rhineland, Upper Silesia and East Prussia. "For Clemenceau, victory had given France a short term advantage, which she should exploit before Germany's larger population and greater economic strength reasserted itself."2 Other than financial gain, Clemenceau understood the possibility of military threat from Germany emerging in the future. ...read more.

This was extremely satisfying for Clemenceau. However Clemenceau was forced to abandon plans to take over the Rhineland completely, and to split parts of Germany. Overall Clemenceau was satisfied with the Peace Treaty but believed that Germany should have been forced to compensate more to France, due to the damage done to France. Britain was able to gain control of Germany's international empires, and was also given some of Germany's confiscated military equipment. With the German navy reduced to 36 vessels and 15000 men, Britain again assumed control of the seas. This increased Lloyd-George's satisfaction of the final terms, as the benefits of the Treaty would contribute to the repayment of loans that Britain owed. However Lloyd-George was not happy about the financial burdens placed on Germany by Clemenceau's urging, as he wanted the German economy to recover, and believed it would cause further resentment. Although Lloyd-George spent part of the negotiations trying to make the Treaty more considerate, his attempts were of little consequence. This strengthened his dissatisfaction, and in 1938 he said, "I do not claim that the Treaty is perfect in all respects."7 Thus Lloyd-George was satisfied with some aspects of the Treaty, like Britain's reparations, colonial expansion, and naval control; but not with the harsh terms the Germans were forced to accept. ...read more.

This was intended to reduce the unfair treatment and difference between nations. The World Court was set up to reconcile legal disputes between nations and aimed to provide international justice. The International Labour Organisation attempted to improve wages, working conditions, and the organisation of trade unions. The Reparations Commission was established in the League to determine the amount of reparations owed by Germany. The League was also established with the intent of reducing the number of armaments, with supplementary organisations like the Disarmament Commission. The League's aim was to place limits on the sizes of armies, air forces, and naval weapons. Thus the League proposed to defeat social, economic and military problems around the world. The League's purpose was to end any possibilities of further wars, and promote peace and stability world wide. Through co-operation and arbitration, and supported by both economic and military sanctions, the League of Nations intended to protect collective security. A new level of open and democratic international relations would be established, with social, political and economic problems being thoroughly dealt with. 1 Rayner, E.G. (1992) The Great Dictators: International Relations 1918-39 London: Hodder & Stoughton 2 O'Brien, C. & Merritt, A. (1996) 1914.1918 The World at war Australia: Heinemann Educational Australia 3 4 5 6 Taylor, A.J.P. (1988) History of World War 1 Spain: Black Cat 7 8 http://www.nps.gov/elro/glossary/wilson-woodrow.htm 9 Evans, D. (1984) Europe in Modern Times 1900-1975 London: Edward Arnold 10 McDonough, F. 11 12 ...read more.