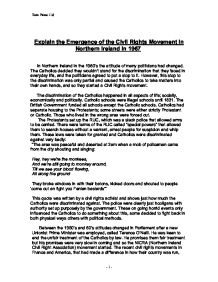 Explain the Emergence of the Civil Rights Movement in Northern Ireland in 1967 In Northern Ireland in the 1960's the attitude of many politicians had changed. The Catholics decided they wouldn't stand for the discrimination that they faced in everyday life, and the politicians agreed to put a stop to it. However, this stop to the discrimination was only partial and caused the Catholics to take matters into their own hands, and so they started a Civil Rights movement. The discrimination of the Catholics happened in all aspects of life; socially, economically and politically. Catholic schools were illegal schools until 1831. The British Government funded all schools except the Catholic schools. Catholics had separate housing to the Protestants; some streets were either strictly Protestant or Catholic. Those who lived in the wrong area were forced out. ...read more.

These on going horrid events only influenced the Catholics to do something about this, some decided to fight back in both physical ways others with political methods. Between the 1950's and 60's attitudes changed in Parliament after a new Unionist Prime Minister was employed, called Terence O'Neill. He was keen to end the unfair treatment of the Catholics by law. He promises them fair treatment but his promises were very slow in coming and so the NICRA (Northern Ireland Civil Right Association) movement started. The recent civil rights movements in France and America, that had made a difference in how their country was run, influenced the NICRA. The marches caused many scraps and big fights where the Police were still going by the "special powers" laws started attacking sometimes innocent and sometimes brutal protesters. ...read more.