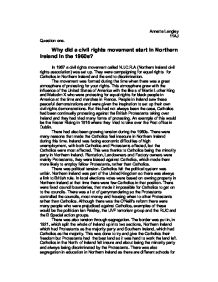 Why did a civil rights movement start in Northern Ireland in the 1960s?

Annette Langley 11AJ Question one. Why did a civil rights movement start in Northern Ireland in the 1960s? In 1967 a civil rights movement called N.I.C.R.A (Northern Ireland civil rights association) was set up. They were campaigning for equal rights for Catholics in Northern Ireland and the end to discrimination. The movement was formed during the time when there was a great atmosphere of protesting for your rights. This atmosphere grew with the influence of the United States of America with the likes of Martin Luther King and Malcolm X who were protesting for equal rights for black people in America at the time and marches in France. People in Ireland saw these peaceful demonstrations and were given the inspiration to set up their own civil rights demonstrations. ...read more.

There was political tension. Catholics felt the political system was unfair. Northern Ireland was part of the United Kingdom so there was always a link to British rule. In local elections votes were based on owning property in Northern Ireland at that time there were few Catholics in that position. There were fixed council boundaries, that made it impossible for Catholics to get on to the councils. There was a lot of gerrymandering so the Protestants controlled the councils, most money and housing when to other Protestants rather than Catholics. Although there was the O'Neill's reform there were many people who were prejudiced against Catholics, examples of these would be the politician Ian Paisley, the UVF terrorism group and the RUC and the B Special action groups. ...read more.

Why did a civil rights movement start in Northern Ireland in the 1960s? But there was on going tension due to British rule. Protestants believed that they were a part of Britain. There were many ways in which the Protestants tried to keep their link with Britain. Catholics always thought Britain was trying to take over their country, so they protested against the Protestants because they thought, it was the British trying to take over. For example Catholics would not join the RUC because it had a connection with Britain and they thought that it they joined it would be siding with the British. There were many reasons why a civil rights movement was set up in the 1960s. It was mainly because they had many aims for their protesting, in their eyes it was a very successful form of demonstrating their wants and needs which was being used around the globe at that time. ...read more.