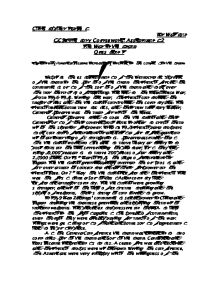 Explain why America became increasingly involved in the conflict in Vietnam.

Christopher Tarbet Mr Walton GCSE History Coursework: Assignment 2 The War in Vietnam Question 1 Explain why America became increasingly involved in the conflict in Vietnam. Despite the establishment of the Democratic Republic of Vietnam in the North of Vietnam the French forced the communists out of the south of Vietnam and took over the northern city of Haiphong. This led to the Indochinese War, from 1946-1954. During this war, the French controlled the major cities and the Vietminh controlled the countryside. The French needed some new tactics, and their new military leader, General Navarre was the man for with the ideas. General Navarre tried to coax the Vietminh and their General out of their covered positions in order to crush them with the superior firepower. In late 1953 French paratroopers took control of Dien Bien Phu and built a fortified garrison with an inner ring of strongpoints. Navarra assumed that the Vietminh would not be able to move heavy artillery into positions on the hills surrounding the plateau, but they did, using 50,000 peasants to move 200 pieces of artillery and 25,000 shells. On 13th March 1954 the siege of Dien Bien Phu began. The Vietminh guerrillas quickly overran the outposts and for over a month concentrated all their firepower on the French base. ...read more.

As the 1960's began the North Vietnamese declared their intention to 'liberate South Vietnam from the ruling yoke of the US imperialist and their henchmen'. Guerrilla attacks by the newly formed Vietcong were having an effect and the South even tried to claim that it was the North Vietnamese army that was attacking them. As things got worse the USA increased its involvement. Even with the US support, Diem's government made more mistakes trying to separate the villagers from the Vietcong by creating strategic hamlets, or fortified villages, that the Vietcong could not get into. The Vietcong easily infiltrated them. These ghamlets failed because they were unpopular, impractical and they cost the US government a lot of money. The Diem regime was repressive, trying to root out communism and the Vietcong, and favouring Roman Catholics over Buddhists. This led to street protests by Buddhists which led to nine Buddhist monks being killed in riots in May 1963. In response to his, a Buddhist monk burnt himself to death in public in protest against the Diem regime. In 1963, Diem was finally assassinated by members of his own army. Because the Diem government was viewed as weak and corrupt, the US did nothing about the plot, which they knew about. ...read more.

Operation Rolling Thunder eventually led to an extensive war from the air as President Johnson tried to force the North Vietnamese to talk about peace. By January 1968, as the Tet New Year festival was being celebrated, the USA seemed to be gaining the upper hand. However the Vietcong launched a surprise attack on more than 100 military sites throughout South Vietnam. In Saigon, a suicide squad of 19 Vietcong attacked the US embassy, and occupied it for 6 hours. Eventually US troops recaptured it, killing every Vietcong fighter. The Vietcong had 4,500 fighters in Saigon, waiting for reinforcements to arrive. They were also hoping that the South Vietnamese people would rise up with them, overthrow the South Vietnamese government and force the US out of South Vietnam. However, the US troops and ARVN fought back and defeated the Tet offensive. From every point I have managed to translate in this essay, it would appear that the USA was increasingly involved in the conflict in Vietnam. By January 1968, the USA had 500,000 troops stationed in South Vietnam. From 1962, where the USA had 100,000 troops in Vietnam, it went to an extreme of 530,000 troops in 1969. This to me seems a bit extreme if they are not getting involved. Also, General Westmoreland asked for another 200,000 troops to finish off the war. This proves that the US was becoming increasingly involved in the conflict in Vietnam. ...read more.