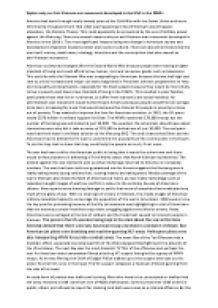 Transfer-Encoding: chunked ﻿Explain why an Anti-Vietnam war movement developed in the USA in the 1960?s America had been through nearly twenty years of the Cold War with the Soviet Union and were informed by the government that what was happening in South Vietnam would happen elsewhere, the Domino Theory. This could apparently be prevented by the use of military power against the Vietcong. There are several reasons why an anti-Vietnam war movement developed in America in the 1960?s. The most significant reasons being the change in American society and development of general student protest and counter cultural. There are also other factors like the war itself, money, death rates, ideology, atrocities and the conscription that also caused an anti-Vietnam movement. American society had changed after the Second World War because people were having a higher standard of living and could afford to buy homes, cars and consumer goods such as televisions. This could be why the Vietnam War was unappealing to Americans because the war had high cost rate so prices increased and ...read more.

The only chance that Diem and the Americans had to defeat the VC was to undermine the popularity of the communists in the South. To do this they had to show that they could help the people as much, if not more. The war had been sold to the American public in being that it would be a short war and there would be few problems in defeating a Third World nation that North Vietnam represented. The protest against the war started to pick up when body bags returned to America in increasing numbers. The war that been sold as a guaranteed win for America against the Vietcong was in reality taking many young soldiers lives, costing money and taking years. Media coverage of the war in Vietnam also shook the faith of Americans at home as new media technology such as television bought images of wartime conflict in colour to the ordinary houses of Americans citizens. ...read more.

An American news cameraman filmed a tied-up VC suspect being led by a group of ARVN troops. As he was filming, the Chief of Saigon Police walked up to the suspect and took out his pistol. He shot him once in the head. The VC suspect collapsed, a fountain of blood gushing from the side of his head. An early form of protest was draft card burning. Men who were to be conscripted or drafted into the army received a draft card from one of 4000 draft boards. Some burned their draft orders in public, others just refused to report for training, and both were seen as a criminal offences. By the end of 1969 there were 34,000 draft-dodgers wanted by the police. Many crossed the border to Canada to avoid arrest. There was a great deal of public unrest on college campuses throughout the 1960s as students became increasingly involved in black Americans civil rights, women's liberation, and anti-Vietnam War movements. Student for a Democratic Society (SDS) were successful in attracting a wide range of support by marches. ...read more.