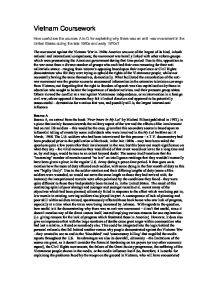 How useful are the sources A to G for explaining why there was an anti-war movement in the United States during the late 1960s and early 1970s?

Vietnam Coursework How useful are the sources A to G for explaining why there was an anti-war movement in the United States during the late 1960s and early 1970s? The movement against the Vietnam War in 1960s America was one of the largest of its kind, in both national and international comparisons; the movement was heavily linked with other reform groups which were pressurising the American government during that time period. Due to this, opposition to the war came from a diverse number of groups who each had their own reasoning for their anti-militaristic stance - ranging from veteran's opposing based upon their experience or Civil Rights demonstrators who felt they were trying to uphold the rights of the Vietnamese people, whilst not necessarily having the same themselves, domestically. What facilitated the exacerbation of the anti-war movement was the greater access to uncensored information in the extensive television coverage from Vietnam; not forgetting that the right to freedom of speech was also capitalised on by those in education who sought to bolster the importance of student activism, and their pressure group status. Others viewed the conflict as a war against Vietnamese independence, or as intervention in a foreign civil war; others opposed it because they felt it lacked direction and appeared to be potentially unsuccessful - devastation for a nation that was, and possibly still is, the largest international influence. Source A Source A, an extract from the book 'Four hours in My Lai' by Michael Bilton (published in 1992), is a piece that mainly focuses towards the military aspect of the war and the effects of the involvement had on real life soldiers - this would be the case, given that this secondary source is based upon an influential telling of events by some individuals who were involved in the My Lai incident on 16 March, 1968. The U.S. soldiers who had been interviewed for this process - a T.V. ...read more.

At the time, this would have been a damaging piece of writing for its noticeable anti-American stance - despite the writer being an American citizen. This in itself shows the deep degree of pacifism within the United States at the time, but this could, nevertheless, be part of a wider-ranging media campaign to prevent any further actions in the war due to other factors, perhaps the increase of taxes - this would indicate that it is possible that Hamer wasn't anti-war based on the prospect, rather the inconvenience it caused him. The fact that this was released during the period of war means it is also linked to the credibility gap; its exposure of American counter-tactics would almost certainly ensure the exacerbation of the anti-war sentiment and give another reason for people already desperate for relatives to return, to not believe what their government was saying. What we need to know however, is whether the information presented in this source is what Hamer actually saw with his own eyes, or whether it was a brief summarisation of stories he had collected from soldiers; if the latter, its provenance could be affected, as soldiers influenced the reporter's personal views. This source was also published one year after the My Lai incident has irreversibly affected most people's views of the Vietnam War - thinking what damage could be done to the reputation of the U.S.A, a country that had protected democracy only 20 years earlier in the Second World War - this could then, be a piece catered towards their views, however, that is unlikely given the deep sense of conviction within the content of the source and the way in which he has written the piece. This sense of betrayal by American soldiers extended to within the hearts of the communities across the U.S. who saw individuals committing acts which could not be seen as 'heroic' in any respect. ...read more.

In that context, and the fact that the film is much more dramatic than necessarily need be, it is easy to assume that this is a piece of biased film-making - despite that, it is useful for one thing; informing us of the thoughts of people who had experienced the full horrors of the conflict and the effect it had on them. It is also historically accurate as all the dates, places and people are all correct - only the story itself is elaborated - therefore it is reliable in some form. Referring back to the original question, "How useful are the sources A to G for explaining why there was an anti-war movement in the United States during the late 1960s and early 1970s?" - I would respond by saying that some are more accurate than others in terms of their respective historical context, their individual purposes (some are cartoons, some are memoirs), and the reality that some are more reliable than others as they represent individual events on film or simply people's thoughts on the war. In terms of usefulness, they have a collective worth as when combined they allow a fuller picture of the war to be completed - as opposed to thoughts garnered from one source. In some sources, the usefulness could be undermined by the purpose or the provenance of each source - authors all have different views on what they write, but this can also be played to our advantage as even this in itself can represent the effect the conflict had on individual writers. Primary sources are not necessarily more beneficial as those that are produced as secondary sources, as often even in these cases, bias is still present - often we forget that in secondary sources, the author has had the chance to evaluate many of the explanations for something of a long period of time before publishing their thoughts - this can give us a better view of what really happened. ...read more.